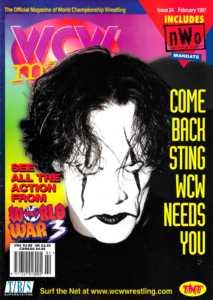 “COME BACK STING WCW NEEDS YOU”

Fantastic cover, taken during the time when Sting was nothing more than a silent observer during the nWo takeover of World Championship Wrestling. The feature on him in this issue of WCW Magazine begs for the return of the Stinger of old, boldly claiming that “[e]veryday Sting is out of the ring, the sport diminishes.”

Well, I wouldn’t go that far but this was a real interesting time for WCW as no one was for certain on which side Sting stood on. Every one would get their answer during the March WCW Uncensored PPV when he rappelled down from the rafters and tore apart the nWo after the main event, but Sting’s allegience was still seemingly up for grabs at this point.

Another cool part of this magazine is the start of the nWo Magazine feature that started to show up. We’re at issue #3 here where the spotlight is pointed directly at Scott Hall along with pieces about Marcus Alexander Bagwell’s turn into “Buff” Bagwell and Vincent hanging out with the Pittsburgh Steelers.

Highlight of the magazine beyond the Mysterio, Harlem Heat, High Voltage (!!!) and Outsiders pinup posters are the predictions for the year 1997. It’s hard to tell when certain parts of WCW Magazine have been written by the wrestlers themselves, but the “[a]ll of the Guerreros will be deported back to Mexico because none of them have Green Cards…” seems like a thing Disco Inferno would say.

There are other odd in-jokes included in the article, which leads me to believe that it is legit. Unfortunately, Konnan and Rey Mysterio Jr. never ended up forming a rock band like Super Calo predicted…