Home Final Years But Why? — The WCW Hardcore Championship

There are a lot of things from later-WCW that, if explained to a layperson, would illicit the response, “But why?” Some examples being: the three-tiered cage, a three-team War Games match, discontinuing World War 3, maybe even some other non-three-related things.

I was only 13 in 1999, and even I asked, “But why?” upon the introduction of the WCW Hardcore Championship.

Now, as a jaded member of the IWC, I understand that it is specifically because the WWF had already created their own Hardcore title a year before. In a broader sense, however, it was inspired by the overall culture of wrestling in the late-90s.

In between commercials for Miss Cleo and Girls Gone Wild, you would see an actual ad on actual television for this actual product.

The ad was only 30 seconds long, but even in that short time you would see scenes like these.

For some reason, it was what people wanted. Not all people, but enough that two of these games were created.

Incidentally, ECW’s popularity was at its peak, having completely abandoned any pretense of rules. Gone were the days of Benoit and Malenko having a five-star classic that ends via time-limit draw. These were the days of Sandman somehow winning a match via giving himself cirrhosis.

Speaking of Sandman, he was one of several ECW alumni used to usher in WCW’s hardcore revolution. Calling himself Hak, he feuded with Raven and Bam Bam Bigelow throughout the first half of 1999 and eventually competed in The Junkyard Invitational, which officially began WCW’s foray into having a Hardcore Championship… sort of.

Strangely enough, the Junkyard Invitational was exactly what it sounds like.

Anyone so inclined was welcomed to come and fall onto, off of, or be hit with part of an automobile. Entrants included names such as the aforementioned Hak, Mikey Whipwreck, Fit Finlay, Public Enemy (who didn’t even work for WCW at the time), Jerry Flynn, Hugh Morrus, Brian Knobs, Silver King, and La Parka in his finest Saturday Dad gear. 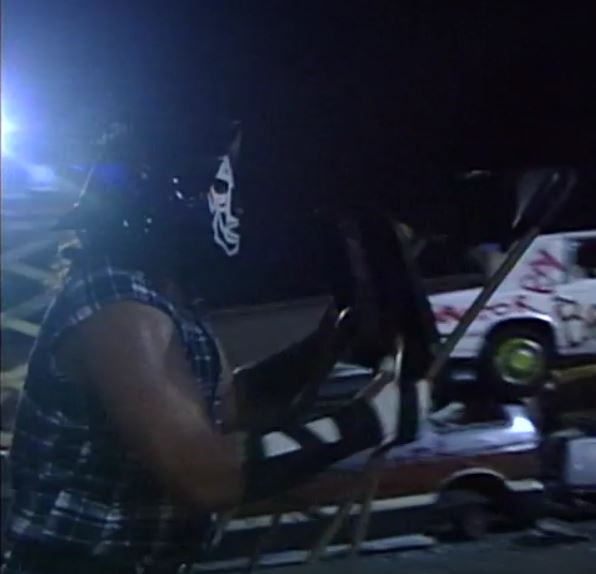 The match was a huge mess but in the best way. Eventually, everyone was so tired that they could only throw random items sporadically, prompting Schiavone to comment, “Well… they’ve resorted to just throwing things now.” Fifteen minutes later, Finlay scaled the fence of the junkyrad, which (I guess) is how one wins a Junkyard Invitational.

At this point, you may suspect that this victory made Finlay the inaugural Hardcore Champion, but you would be wrong. Don’t feel too bad, you just foolishly used logic and evidence to draw a conclusion. Fit’s reward for winning this bout was a real pile of garbage, the Hardcore Trophy. 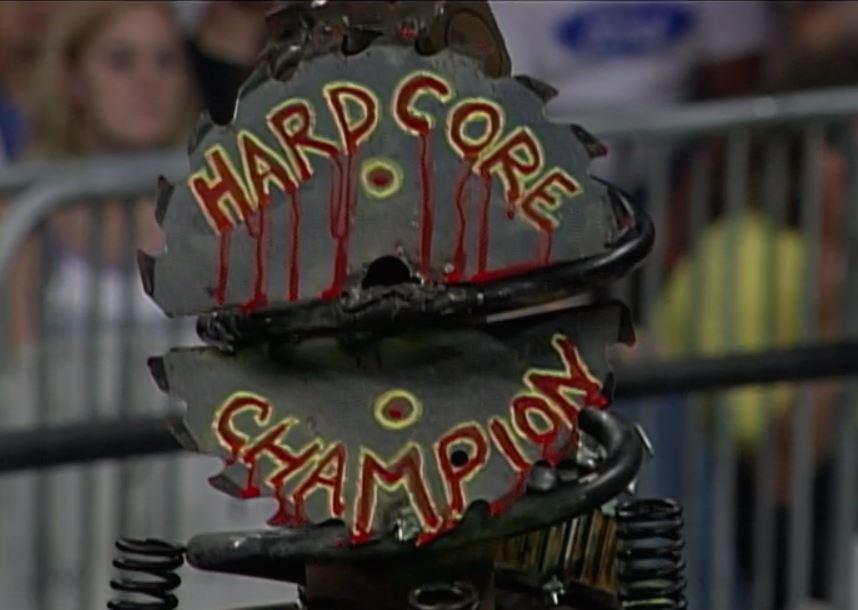 In storyline, Fit got into a feud with Bischoff who quickly stripped him of the trophy. I would assume that in real-life Bischoff came to his senses and realized that trophies are always a terrible idea in wrestling. The trophy was traded for a belt that was a blatant copy of an ECW title, and a tournament was held to crown an official Hardcore Champion. 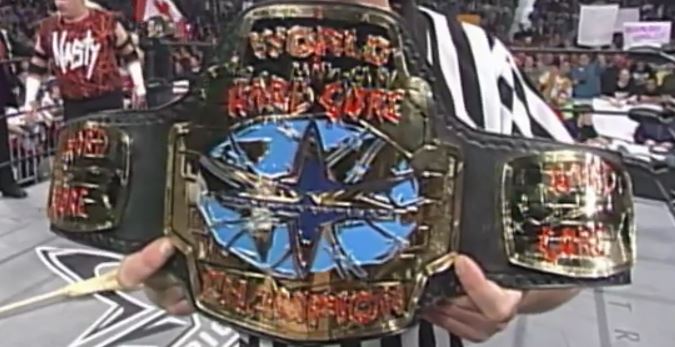 At Mayhem ’99, the finals of the tournament saw Brian Knobs face Norman Smiley. The joke here was obviously that Smiley had no business being in a hardcore match, and as such came to the ring in full hockey pads. 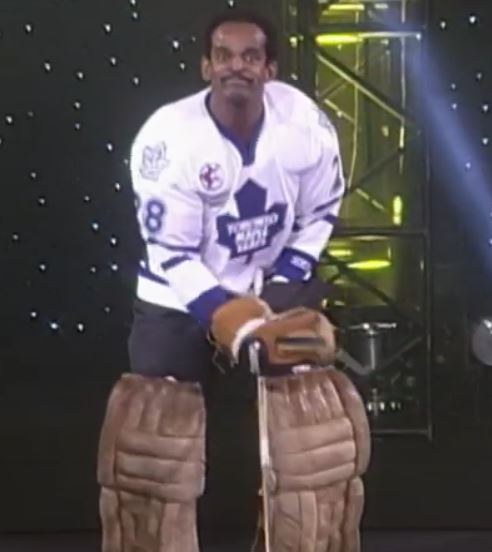 The two brawled all over the arena, with the match ending in an elevator. Smiley and Knobs entered the elevator car, the door closed behind them, Jimmy Hart opened the door expecting to hit Smiley with a trash can, but SURPRISE it was Knobs. Norman got the pin inside the elevator and became the first officially-recognized WCW Hardcore Champion.

Norman Smiley also holds the distinction of being the longest-reigning champion, at 51 days, and honestly, that’s a respectable amount of time for any modern-era championship.

The title changed hands between Smiley, Knobs, and Bigelow throughout the first few months of 2000. On the February 28 edition of Nitro, Brian Knobs was in his second tenure as champion. He agreed to defend his title against all three members of 3 Count (see above), confident in his ability to brutalize the boy band. To his credit, the match was 4 minutes of him doing just that, but it has already been established that punchlines beat clotheslines in this division. The trio dogpiled Knobs to become co-Hardcore Champions.

3 Count defended the single title together since hardcore matches are, by default, no disqualification. March 19, less than three weeks later, Knobs was able to regain the title at Uncensored with the help of his new partner, Fit Finlay.

In April of that year, Brian’s third reign as champion came to an unceremonious end exactly one mile from my house at the Pepsi Center in Denver, CO. This was the site of the infamous reboot and the ushering in of what is sometimes referred to as WCW 2000. Russo and Bischoff addressed the locker room and the crowd, promising a fresh start for the company including “new champions.” All champions, including Knobs, forfeited their titles.

Yet another tournament was held to determine a new Hardcore Champion, and Smiley was once again in the final. This time, his opponent was the newly-arrived Terry Funk. The two faced off at Spring Stampede ’00.

The title flip-flopped between Funk, Shane Douglas, and even Bischoff. The latter two only holding the title from Nitro to the following Thunder. After winning the title, Bischoff, as the WCW President, awarded the title to Big Vito and Johnny the Bull, allowing them to defend it as co-champions. How could one possibly ignore the siren song of such distinguished gold?

My sarcasm aside, the two clashed on Nitro on June 19, with Vito emerging as the sole champ. These two had a surprisingly good match, especially for the division.

At this time, Lance Storm was on a mission to collect as many title belts in WCW as possible. As part of his crusade, he had set his sights on Vito’s Hardcore Title. On July 24, he captured the belt and renamed it the Saskatchewan Hardcore International Title.

Eventually boring of the title, Storm awarded it to Team Canada stablemate, Carl Ouellet. Ouellet holds the distinction of having the shortest title reign at an incredible 37.5 minutes — losing it on the very same Nitro on which it was received. Ill gotten gains and all that. Once again, the title was where it belonged — around the waist of Hardcore Legend Norman Smiley.

After another (relatively) lengthy run as champion, smiley was stripped of the title by then-WCW commissioner and member of the Natural Born Thrillers, Mike Sanders.

The final four men to hold the title were Reno (I went ahead and made that a Google search to save you the trouble), Crowbar, Terry Funk (who tied with Brian Knobs for a record three title reigns), and Meng. Meng was the final champion — partly due to WCW only existing for 2 more months, but mostly due to the fact that he won the title at WCW’s SIN, and then one week later, was an entrant in the Royal Rumble as Haku.

While not a remarkable end to the WCW Hardcore Title, it was a fitting one. I suppose we could take some solace in the fact that he didn’t appear on WWE television and drop it in a trash can. Although, perhaps, for a legacy that started in a junkyard, a trash can would have been a fitting tribute.

I love you guys but this is so wrong. ECW was more wrestling oriented than before by 1999, and guys WCW had doing jobs on WCWSN went on to have 4 and 5 star matches in ECW before it was over. Meanwhile the WCW hardcore division wasn’t what I’d call kiddie hardcore wrestling (until Russo anyway). The junkyard match’s general review was actually that it was a good death match type match that got killed by some production goofs.

I’d like to hear a Deathmatch nerd’s take on the WCW Junkyward match now.

lol I loved this period of WCW.

Who started “hardcore matches?” I’m sure it was the NWA and their I Quit matches.

I would argue Texas Death Matches were among the first “hardcore” matches.

Norman Smiley was the best and only great thing about WCW’s hardcore division.

WCW in the ECW logo freaks me out. I don’t know why!

I’d print up shirts just to fuck with people but I’d be the only one would want it.

I’d want one of those t-shirts lol

Triple J – Jeff Jarrett Jr!!! lol!
Great recap of those crazy days, what a time it was to be a wrestling fan!