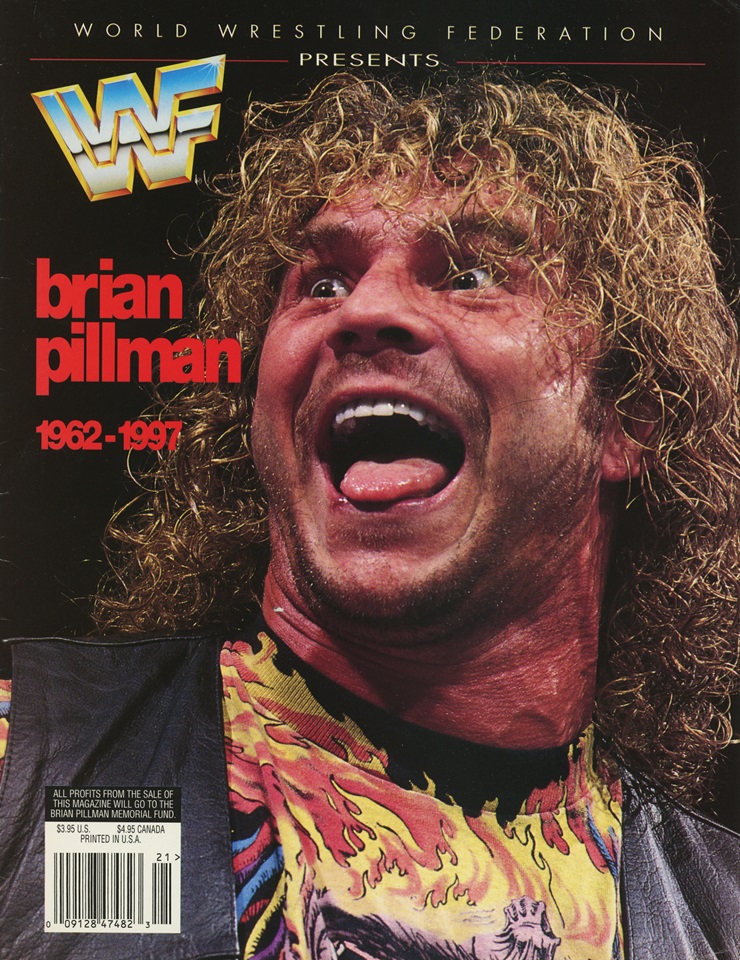 After Brian Pillman’s untimely death in 1997, the World Wrestling Federation released this magazine as a tribute to the fallen wrestler. Inside were stories that covered Pillman’s entire life including life in Calgary Stampede Wrestling, tagging with Stunning Steve Austin as the Hollywood Blonds in WCW along with interviews with those closest to him.

Mick Foley: “One of the first matches I had when I entered the National Wrestling Alliance in 1989 was with Brian. It was my first jump from the small independents to a nationally known group. Brian was a very popular wrestler at the time and we had a match that opened up a lot of people’s eyes as far as what I could do as Cactus Jack. There is an intangible in wrestling known as chemistry between two wrestlers. Sometimes two great wrestlers don’t have chemistry together. Brian and I always seemed to have that. We were just opponents for a long time and later became friends. He would call me up when he was injured and he would offer me what he called ‘Pillman’s Pick of the Week’, which would be some kind of Brian Pillman philosophy or joke.  I would attempt to use them in interviews. One example is how he would say, ‘Don’t be afraid to go out on a limb — that’s where the fruit is.’

So, in my interview, I would turn it around and I would say, ‘Don’t be afraid to go out on a limb — that’s where the carrots grow.’, just to see how many people would realize that carrots don’t grow out on a limb.

It was always nice to get a response from Brian, you know, like the ‘thumbs-up’ for using a ‘Pillman’s Pick of the Week’. So, that’s what I’ll remember most about Brian — witty comments and his philosophies on life. I’ll miss that.”

I’ve scanned in the magazine in its entirety, lots of great photos in this one. Unfortunate that Pillman never had a chance to become a player in the Attitude Era as he seemed like one of the few guys helping the WWF transition into the edgier promotion it became in the late 90’s.