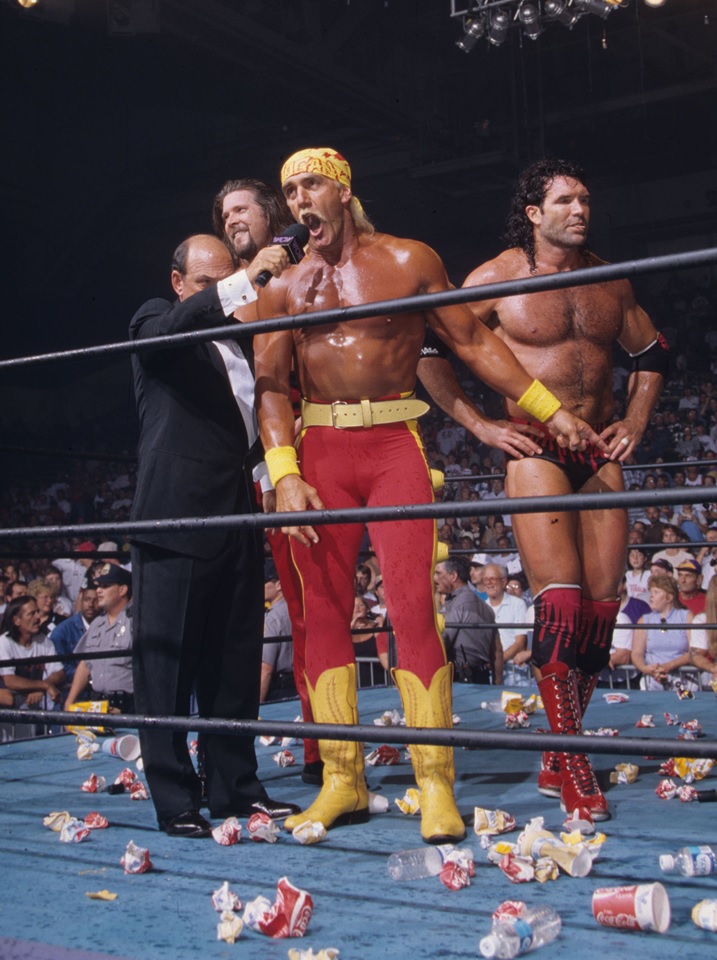 It was a moment that shocked the world. The biggest hero of his era and arguably the closest thing wrestling has seen to a superhero come to life, Hulk Hogan, dropped the leg on his friend “Macho Man” Randy Savage at WCW’s Bash At The Beach 1996 PPV.

That leg drop sent shockwaves through the wrestling industry as the Hostile Takeover by the men formerly known as WWF’s Diesel and Razor Ramon (Kevin Nash and Scott Hall) had the BIGGEST of big guns as their “third man.”

Let’s back up for a second though and look at this through the eyes of this (at the time) young man who grew up on 6:05 Saturday Night.

It was an exciting time for wrestling fans. This period of WCW is the only time in the business where we gathered and purchased all of the PPVs. Up until this point, I was a kid listening to scrambled PPVs. Later on, I purchased WrestleMania and maybe the Royal Rumble every year, and that was it. Purchasing all the PPVs during this era felt reasonable though as there was an excitement and electricity surrounding each of them.

Another thing that jumps out to me when we revisit this historic moment is that my dad, my uncle, my cousin, and I all thought the “third man” was going to be Bret “The Hitman” Hart.

I literally have no idea. This was a couple of years before I even got on the Internet, so it’s not like any of us read it there. I’m not even sure that any of us would have known about wrestling newsletters at the time, but for some reason that was our guess.

We were wrong about that, and what we got was way bigger and more important.

Hulk Hogan becoming Hollywood Hogan was truly a seismic shift in WCW and the wrestling landscape. As cool as Hall and Nash were, it was that moment that took this storyline from intriguing to monumental.

With the trio in place, WCW did the next most important thing when they absolutely nailed the nWo aesthetic. The black and white videos, the shirts, and the music were all pitch-perfect. Twenty-five years later, that logo and the nWo shirt still stand as an iconic look. Everything about it still exudes “cool”, and more importantly it did back then as well.

Wrestling did not become cool in the 1990s because of the nWo, but the stable is a big part of it.

I was 14 at the time and thought it was Bret Hart too. All the WWF guys were leaving and it looked like Bret did too. No one was thinking Hogan or Sting.

I remember Bret being a common thought, but for the life of me I have no idea how me and my family came to that conclusion. My buddy may have floated it to us as he was more plugged in than we were back then>

Bret would have been cool and I love Bret, but it wouldn’t have hit the way it did with him instead of Hogan.

Bret! I think my friends thought the same, even though looking back now that would have been terrible.

Dave
Author
Reply to  THE GHOST

I like the idea of it being Bret, and that’s one reason the nWo 2000 kind of appealed to me because we’d finally get Bret, Hall, and Nash. All that said, Hogan made the moment in a way that Bret Hart wouldn’t have no matter how much I love The Hitman.

Back then, I didn’t watch WWF. Yes WWF, and wasn’t familiar with Diesel or Razor Ramone. Hogan was my main draw to the NWO. Will say now, that I really became a Kevin Nash fan, but cannot stand Scott Hall to this day.

Hogan really made the thing POP for sure, it doesn’t take off quite the same with anyone else as the third man.