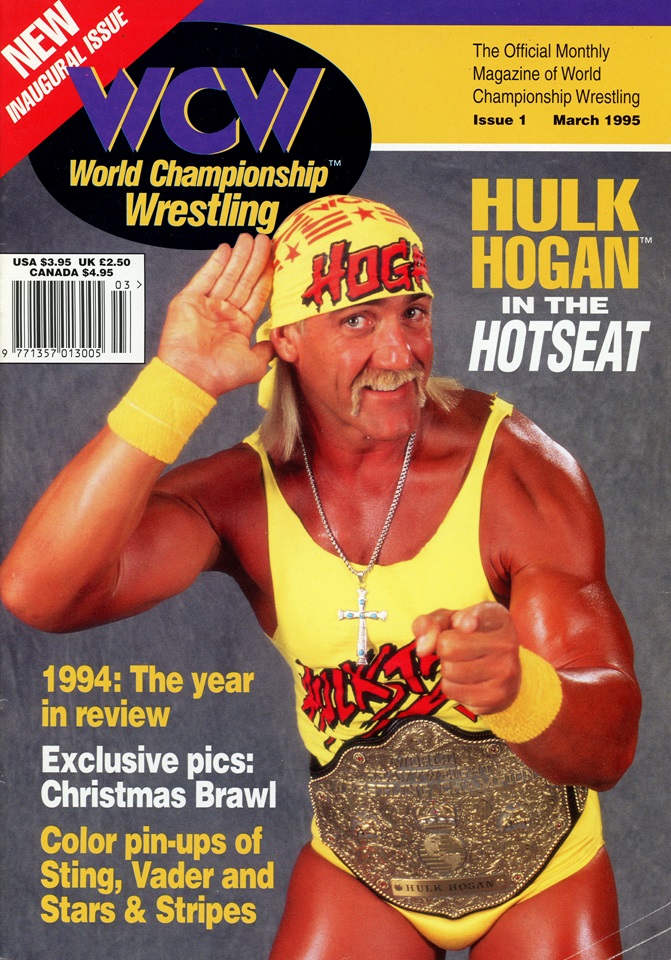 Whenever I first started scanning in magazines, I used to go with Twitter polling to see which issue I would work on next for the DOWNLOADS! page. While I will eventually get back to doing things that way, I stopped in order to speed up my scanning times while also trying to work on having EVERY year covered. We are almost there but not quite, so here’s something to help cover 1995 while I work on getting something ready for 1996 and 1999 next…

This issue is kinda interesting as it’s the full reboot of WCW Magazine! After the July 1994 issue hit the newstands, the magazine took a complete hiatus and missed out on so much WCW coverage. This #1 issue makes sure to give all new fans a quick overview of everything that went down in 1994, including the debut of some guy named Hulk Hogan. That’s right, HULK HOGAN happened right when the magazine went dark but thankfully by the time the publication was brought back to life, The Hulkster was STILL WCW World Heavyweight champion.

Some good pics are to be found inside this issue, but unfortunately, some of the better ones are completely ruined by bad magazine layout and design. Full page pics of guys like Vader, Sting and Stars and Stripes (The Patriot and Marcus Alexander Bagwell) are welcomed and appreciated!! A two-inch photo of Hulk Hogan posing with The Big Gold Belt alongside the freaking Mighty Morphin’ Power Rangers?!?? I would’ve made THAT the two-page, pullout poster!!

This run of WCW Magazine would continue uninterrupted until World Championship Wrestling was bought out by Vince McMahon in 2001. 1995 was such a strange year for the company, one that doesn’t seem to get as much attention as the 1996-1999 era. Because of that, it’s always worth an extra second to take in what was going on during this time. I mean, by the end of the year, WCW Monday Nitro would be on-air and become WCW’s main focus for their attack on the World Wrestling Federation. Things were starting to get moving for WCW, but they still had work to do. Eventually, the Hulkamania shine would lose its luster and the company would be forced to move in another direction, but WCW was not there yet.

Fun flip-though. Special prize to the first person who correctly emails me how many times Triple H appears in this magazine.

[EDIT: You can all stop emailing me, Jason S. has already claimed the prize]