Home Final Years Sometimes the Apple Falls on the Other Side of the Orchard: An...

I don’t believe in guilty pleasures. If you like something, you should own that. I am happy to admit that I like things that suck. I don’t like it because it sucks, nor do I like it in spite of it sucking. No, I am fully capable of existing in a world where I like something and it sucks.

Luckily for me, as someone that grew up in the 90s, late-era WCW provided a substantial amount of programming fitting these criteria. Like an illegal PPV stream, 1998-2001 WCW could be described as “working…sort of.” Perhaps no single performer better represented exactly what I love about failing so earnestly despite having flickers of talent than David Flair.

Technically, David Flair first appeared in WCW at Starrcade 1993 after his father’s defeat of Vader for the World Heavyweight Title.

But let’s jump ahead to late-1998: Ric Flair had recently become the (kayfabe) president of WCW, and was embroiled in a feud with Eric Bischoff and the somehow-still-existing nWo. David would get involved as the nWo would attack his father, eventually leading to a tag-match at Souled Out ’99 against Curt Hennig and Barry Windham. The buildup to said match went thusly:

So how does a man react to being viciously beaten by a gang of thugs? He joins them, of course! The very next month, David turned against his father, helping Hogan to retain the title and joining the nWo.

Following this, David became a regular member of the roster, though only wrestling occasionally for obvious reasons. Over the next year, any time creative hit a wall with his character, the default seemed to be to have him either align with or turn against his father, whichever the current situation dictated. The two reunited for the final time in late ’99, and this is where the seeds that blossomed into “Crazy” David Flair were planted.

By October of 1999, David had lost both the U.S. Title (I know, but it’s true) and his girlfriend, Torrie Wilson (I would make a joke here, but the dude was legitimately engaged to Stacy Keibler). Ric returned to television after being sent home due to real-life issues with Bischoff, and who better than he to help his son through this difficult time? The Jersey Triad, consisting of DDP, Bam Bam Bigelow, and Kanyon, had a problem with the returning Ric and decided to turn their attention to the two Flairs. Kimberly distracted David while her husband injured Ric, and the sight of his father injured and writhing in pain Drove.Him.Insane.

His new affliction had all the symptoms of classic wrestling psychosis:

Wide-eyes, disheveled hair, carrying a crowbar… he was exhibiting all the signs. He put his new look on display the following Nitro, where he ruined DDP’s bid for the World Heavyweight Title. 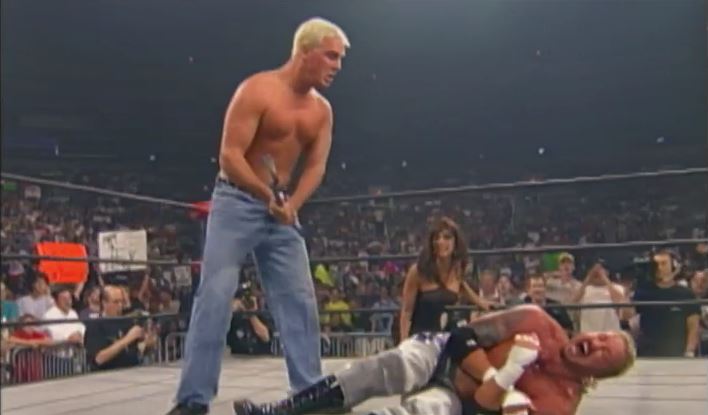 With Ric and Dallas both out recovering from injuries, David and Kimberly were left to settle the score the best they could. In this case, that entailed Kimberly hitting David with a car 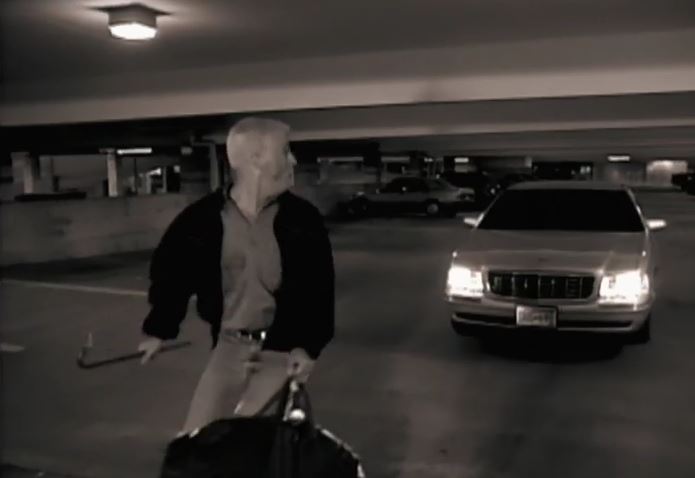 and David becoming a violent stalker. 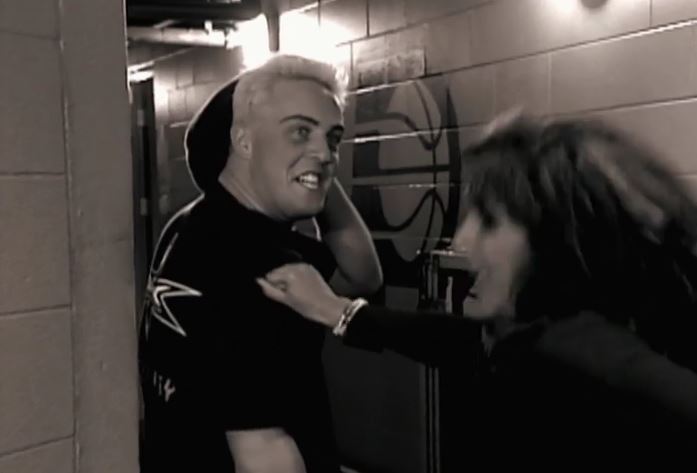 As if you couldn’t tell, all of this occurred during the reign of Vince Russo. As such, this led to a match between the two at Mayhem. It was terrible in every sense.

After DDP and Kanyon laid David out, Uncle Arn returned to make the save, and he ate a crowbar from David for his troubles. Once again, David had turned against the side of his father. More importantly, he had firmly committed himself to being a loose cannon.

At Starrcade 1999, Dallas and David finally settled their issues in a Crowbar on a Pole match (remember, I told you this was Russo’s WCW). Surprisingly, this was an actual wrestling match. David had been training at the Power Plant over the course of the year, and he was able to display an impressive amount of skill. I’m sure a great deal of the credit goes to Page, but even so, if there was one match of David Flair’s that should be watched to get a real sense of his ability, it would be this one. Page won the bout, and went for a post-match beating on Flair. However, he was stopped by a mysterious woman.

Daffney had been shown on a previous Nitro as the winner of a Nitro Party contest, her winning submission including a shrine to David Flair. I can’t exactly make fun of her for that one; I did research and wrote an entire article about him. Over the next two weeks, David descended quickly into madness. His eyes became wider, his hair more disheveled, and the crowbar…well it was the same, but it seemed more menacing.

Speaking of Crowbar, on the December 23, 1999 edition of Thunder, there was a segment wherein David and Daffney were driving to the arena. They stopped at a gas station and met a mechanic/fellow lunatic named Crowbar who saved David after he was ambushed by the Misfits (Yes, the band. Yes, they were in WCW). The couple parted ways with Crowbar, but it was clear we’d see him again. A scant 4 days later at Nitro, David was scheduled for a random tag-team match with the random partner of the Maestro against the random team of Evan Karagias and Vampiro. The Maestro didn’t make it to the ring, but his attacker did, and a perfect stable was born.

For anyone wondering what Crowbar brought to the team, the simple answer is that he was the one that could wrestle. By this point he was a journeyman that had been back-and-forth between WCW and WWF, but never really found his place in either. The slightly more complex answer, if you’ll indulge my editorializing, is that rather than bringing something to the team he took something away. He took the burden of looking like a traditionally competent wrestler away from David. Any heavy lifting that needed to be done, both figurative and literal, would be done by Crowbar while Flair could be in full-on “character” mode. This is evident in their very first match as a team; the ease in performance and commitment to character shown by David is overwhelmingly obvious.

Because the only thing Russo likes hotter than his women is his shots, this brand new team won a tournament for the vacant tag titles the next week on their second appearance on Nitro. They defeated the nWo 2000 (a story for a different time) with the help of Arn Anderson as guest ref. Why would Anderson help a man that hit him with a crowbar the last time they interacted? I don’t know, but he should have learned from the past because after helping the crew of crazies win the belts, David laid him out with the crowbar again.

The team lost the belts two weeks later, but maintained relevance. However, something was coming that would lead to the split of both the team and my 14-year-old heart. 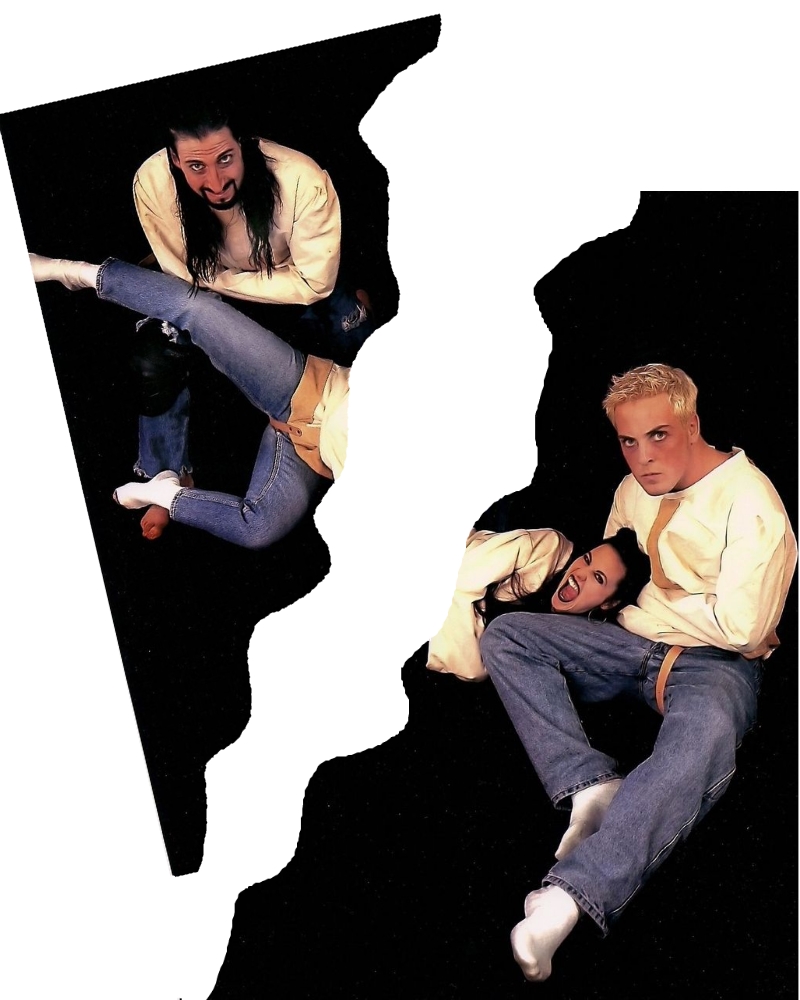 In April of 2000, the infamous reboot occurred. All champions were stripped of their titles and all current feuds literally just stopped because Russo and Bischoff came to the ring and declared it so. This reset of the WCW Universe also served to create the New Blood stable, led by the two bosses who were assisted by Miss Hancock.

Hancock was able to seduce David away from Daffney, destroying what little belief in love I had left. 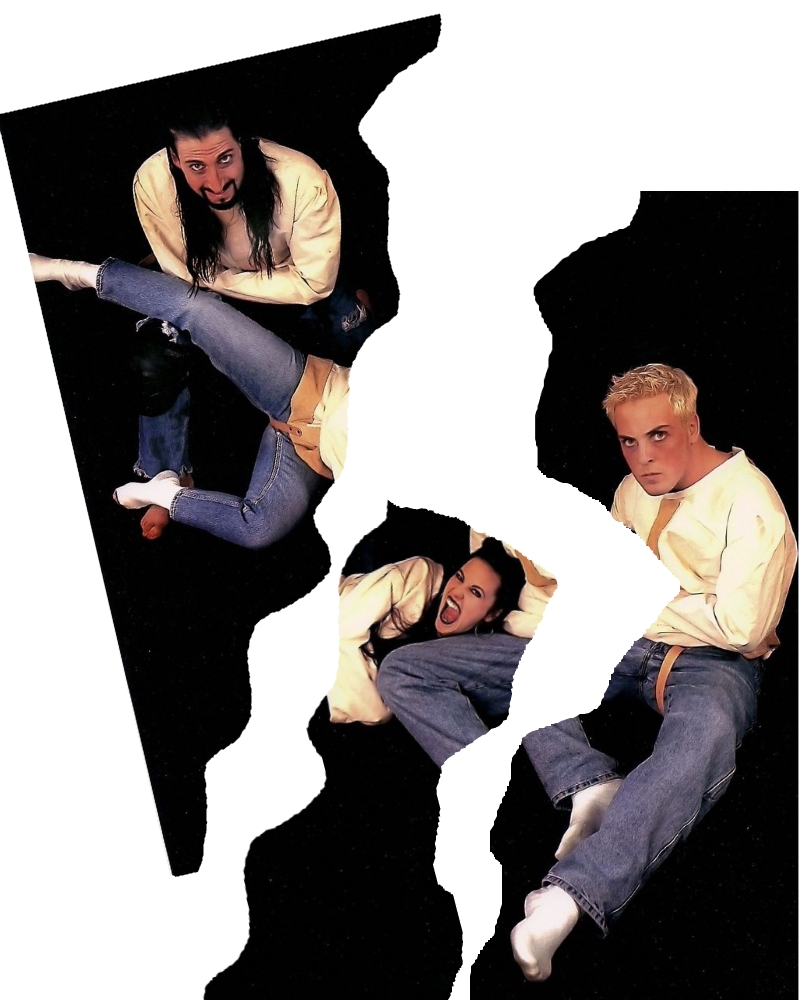 He had nothing to do, so he feuded with his father again. The two met at the final Great American Bash, with David submitting to the figure-four. This loss meant nothing, however, as the very next night on Nitro, David with Vince Russo beat Ric, “retiring”(lol) him and shaving his head.

On the September 11 edition of Nitro, David was set to marry Ms Hancock, now using her actual name, Stacy Keibler. For the occasion, David reconciled with his father, Daffney, and Crowbar. In fact, all were included in the ceremony. 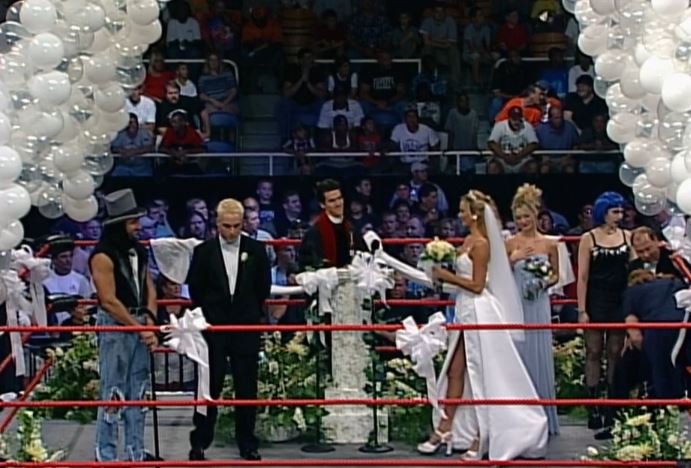 In keeping with tradition, the ceremony did not go as planned, as Stacy revealed that she was pregnant with someone else’s child. This set David and Ric on a quest to find the real father. The entire storyline was thrown away when Stacy and Shawn Stasiak were shown to be colluding against David the entire time. Sadly, this nothing story marked the end of David’s time as an in-ring competitor.

He was used against his father one final time, as WCW hobbled on its last legs. In February 2001, a month-and-a-half from the final episode, David was kidnapped by Kevin Nash and held for ransom in exchange for Ric, who was in some sort of authority role, making a match for Nash against Scott Steiner for the world title. Ric consented, and Nash came from the back, powerbombed David in front of his father, and that’s basically the last thing that ever happened to David Flair on WCW television.

He surfaced again in WWF and later TNA, but in my mind and in my heart, David Flair only existed for about two-and-a-half years.

To those that hate the final years of WCW, I get it, and I can’t say I blame you. All I can suggest is that you find something in there that pulls you in. I firmly believe that somewhere in the confusing quagmire that is later-WCW, everyone can discover some strange element they are attracted to, despite every single piece of evidence against said attraction. For me, that attraction exists with David Flair.