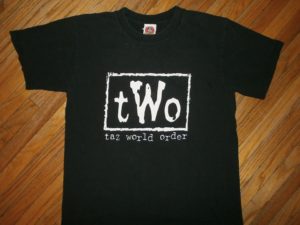 At first glance, you’d think that this would be some sort of bootleg wrestling shirt or possibly a creation by geniuses over at ECW to help put over their world heavyweight champion Taz. After all, there was already TAZ 6:32 TWICE AS PISSED gear put out there by the hardcore wrestling promotion (because AUSTIN 3:16 x 2 = 6:32, you see). Why couldn’t there be a TAZ WORLD ORDER shirt as a way for the “Human Suplex Machine” to get under the skin of the WCW legal department??

Then you flip that shirt over…

That’s when you’d realize that an unholy union has been formed due to Turner Broadcasting System merging with the Time Warner conglomerate. Looking back, it doesn’t seem too crazy that this partnership existed but the large amount of ADULT SIZED WCW/Looney Tunes shirts that still float around eBay nowadays is staggering. I mean, the last time I wore these cartoon characters on any article of clothing I owned was probably for class picture day back in fourth grade (my shirt, btw, had the Hip-Hop Bugs and Taz on it).  Even as big of a wrestling fan that I am, I don’t think that I could ever bring myself to walk around in public wearing something like this:

Then again, who am I to judge? I still wear X-Men shirts with John Byrne artwork on a regular cycle at age thirty-two.

World Championship Wrestling’s partnership with Looney Tunes lasted for only a couple of years, but it looks like Warner Brothers went all out for it. Inserting random shots of Taz or Wile E. Coyote alongside promo pictures of wrestlers was not good enough for the brand, there was mash-up art created to fully legitimize this weird-ass partnership. Taz wearing Goldberg’s gear! Tweety Bird all decked out in Sting’s Wolfpac singlet and makeup!! Even a D-list Looney Tunes character like The Crusher managed to sneak himself onto an nWo Wolfpac shirt dressed as Kevin Nash (I think):

I’ve also stumbled upon a couple of backpacks marked up with New World Order logos alongside Taz, so there’s a good chance that more merchandise exists outside of what I’ve included below in the photo gallery. I mean, even though WCW folded in 2001, Bill Goldberg still starred in Looney Tunes: Back In Action two years later for Time Warner. I’m guessing that the big-wigs at AOL/TimeWarner wanted to get SOMETHING in return for the millions Goldberg’s guaranteed contract gave him even after WCW went under. There could be additional Goldberg + Looney Tunes gear out there that I’m missing!

The full gallery is below, click-through for all of the hot garbage that probably now only exist in thrift-stores across the country. The nWo Wolfpac “Too Tweet” one is a personal favorite but there’s a Bugs Bunny throwing out the Diamond Cutter hands shirt that I pulled from the 1999 WCW Catalog that’s amazingly awful in all of the best ways. For years, I’ve yet to come across any evidence of that thing actually existing, and it could very well be my WCW holy grail now that we’ve recently gotten proof-of-life of that supposedly mythical Hulk Hogan raft.

But you still couldn’t pay me to wear it.

Generic WCW looney tunes shirts were so redneck. I am pretty sure Taz had a macho man one

The sad thing is, shirts like this still are still being made today. Except they’re not wrestling related.

There are actually many more designs other those being shown here. I didn’t knew about those even when I see them a long time ago, but currently I realised how unique they are!

I’ll have to revisit this post soon. I’ve found maybe one or two more shirts since.

What the hell?? Hahaha

Hey, leave Taz and the tunes out of this lol