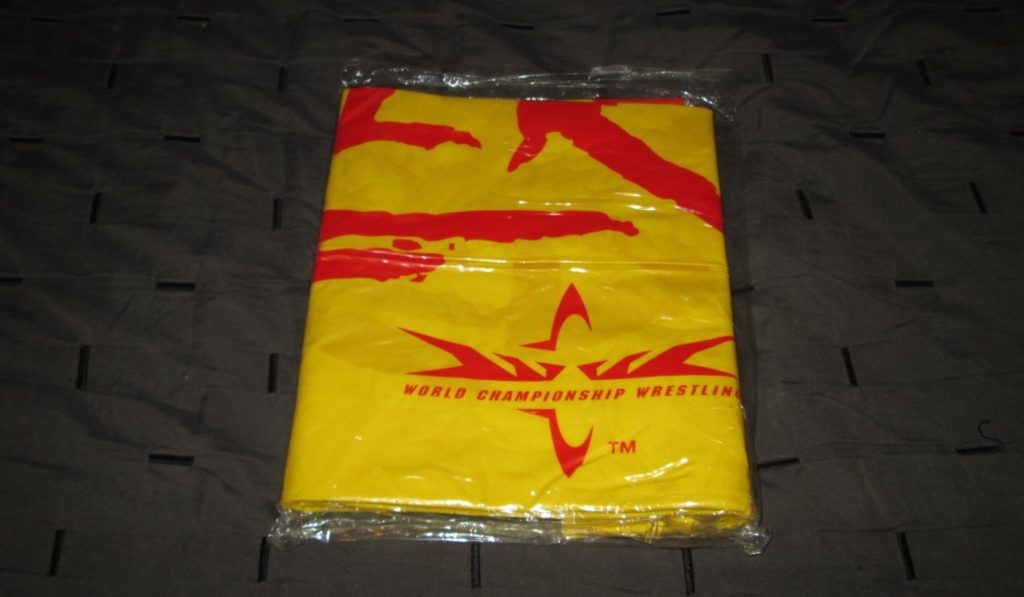 Originally given away by World Championship Wrestling to fans who sent in their cable bills proving their purchase The Great American Bash 2000 PPV, the Hulk Hogan inflatable raft has become a thing of legend over the years online. Brought up numerous times on WrestleCrap, Wreddit, and various social media sites, the Hulkster raft became a wrestling Sasquatch of sorts due to the fact that no one could prove without a shadow of a doubt that WCW plastic floatation device even ever existed.

In today’s world, calling up any oddball wrestling item through a quick Google search usually works 100 percent of the time but pictures of this raft have eluded fans for a couple of reasons. According to WCW PPV buy numbers by Chris Harrington, you would have had to been part of the 80,000 (estimate) who actually bought the Great American Bash PPV AND actually cared enough to send in your cable bill to WCW for this promotional item. Vampiro vs Sting in an Inferno Match along with Russo and Bischoff promising a HUGE surprise ended up convincing me to buy this PPV back in 2000 (spoiler: the surprise was a Goldberg heel turn), but I must’ve just passed on getting in on this magnificent deal. However, even if I DID send in my cable bill to WCW, I could’ve possibly run into another problem.

Apparently, fans who even sent in their bills never actually ended up receiving the Hulkster raft as promised by known liar and rampant Twitter-blocker, Tony Schiavone.

Not only did WCW fail to entertain their remaining diehards with their abysmal Nitros and PPVs in 2000, they also failed with seeing through at delivering a cheap, plastic raft that they advertised. While there was a “while supplies last” tagline in the ad, you would’ve thought that someone could’ve provided evidence of its existence a lot faster by now. Even the official WWE Archivist account has been quiet on the matter despite several questions regarding the raft being thrown his way on Twitter. Sixteen years is a long time to wait for such a dumb item and sad to say, the above photo is all I have of it (for now). Even the original eBay seller wasn’t even aware at the absolute GOLD he had in hand, whenever I asked about it

“Unfortunately I don’t have any other pics, as it was sealed and never opened. I had it in my collection since 1999-2000. I assume that it is a rare item, as I was shocked how many views and bids it received.”

Special thanks to friend of the site Adam L. for sending in an email giving me a heads up on this item. Unfortunately, I was too late to bid on the inflatable Hulk Hogan raft but you better believe I would’ve put up a fight just to get more photos of this WCW Holy Grail. I’ll put a call out on my social media sites, and I will update this post with more photos if I can.