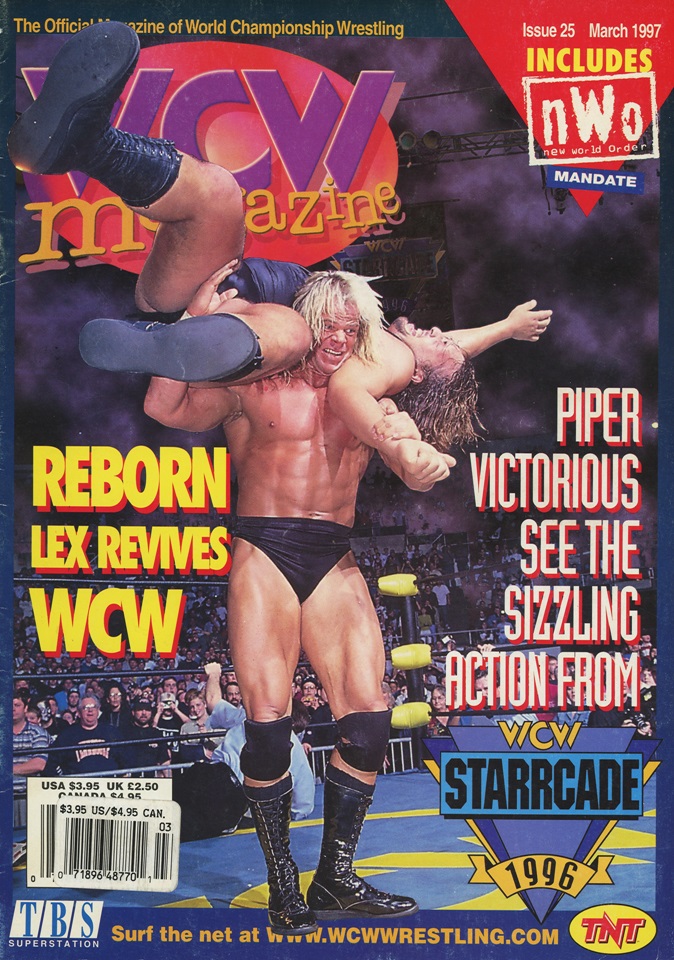 We are in the Monday Night War with the nWo running things in World Championship Wrestling. Hollywood Hogan is the champion but LEX LUGER has shown back up, and he’s determined to make WCW the No. 1 professional wrestling organization in the world again!

Some great photos along with a fantastic Hogan/Sting pull-out poster are in this one. Also, we see the beginnings of wrestlers legit-writing their own columns in character with Disco Inferno and Public Enemy getting some magazine space. Chris Jericho once told me on Twitter that he, Bret and Konnan did their own columns in the magazine, so I’m gonna guess that Rocco Rock was doing the same too. I dunno.

1997 is a neat parallel to the early 90’s WCW where Sting becomes sidelined and Lex Luger is the one that steps up in his absence. Previous magazine scans have this exact narrative, so it’s weird to come into the same storyline here with Lex “REBORN”. Luger’s story of being one of wrestling’s greatest underachievers is funny specifically as it lays out how even winning a world championship hasn’t scrubbed off the negativity around his career. Lex Luger continually fails to live up to the hype, but now is his moment to finally shine and cement his legacy as one of WCW’s biggest stars.

I was a huge fan of Lex Luger as a kid, specifically due to moves like The Torture Rack and his bionic forearm (steel plate in his arm due to a motorcycle crash? — whaatt!!?!), but the assessment is fair.  When you end up ranking all the WCW World Heavyweight Champions, where does Lex come in? To me, his most interesting stuff is earlier in his career pre-WWF. Luger has some highlights late in his career for sure, but even here in 1997, he doesn’t get a shining moment until months after this magazine whenever he beats Hogan for the championship. That one iconic moment gets played constantly on WCW retrospectives due to the emotional impact of WCW finally beating the nWo, and how cool the visual is of all of the wrestlers celebrating alongside Luger. Though, his second WCW World Heavyweight Championship win never gets the chance to touch the 200+ days that his previous reign had as Luger would lose the title back to Hogan only FIVE DAYS LATER.

Sting would be the next person to dethrone Hogan with the whole Starrcade debacle as Luger would then return to being a tertiary main-event star in WCW.

Working on cleaning up ANOTHER WCW Magazine from 1997 before getting one finished from 1998. You wanted more Monday Night War magazines, I will try to deliver even if their size, layouts, and length are absolute nightmares to scan correctly at times. Even this issue was printed incorrectly with some borders completely askew, which drove me crazy trying to line up pages properly before realizing that my scans weren’t bad, the damn mag was! 50-ish pages is manageable but 1998 has the magazine jump to almost 100, so that’s why there’s such a gap there on the Downloads page.

Also, I will be putting out more of the WOLFPAC MADNESS tees here soon along with a new MACHO BRAWLER enamel pin.