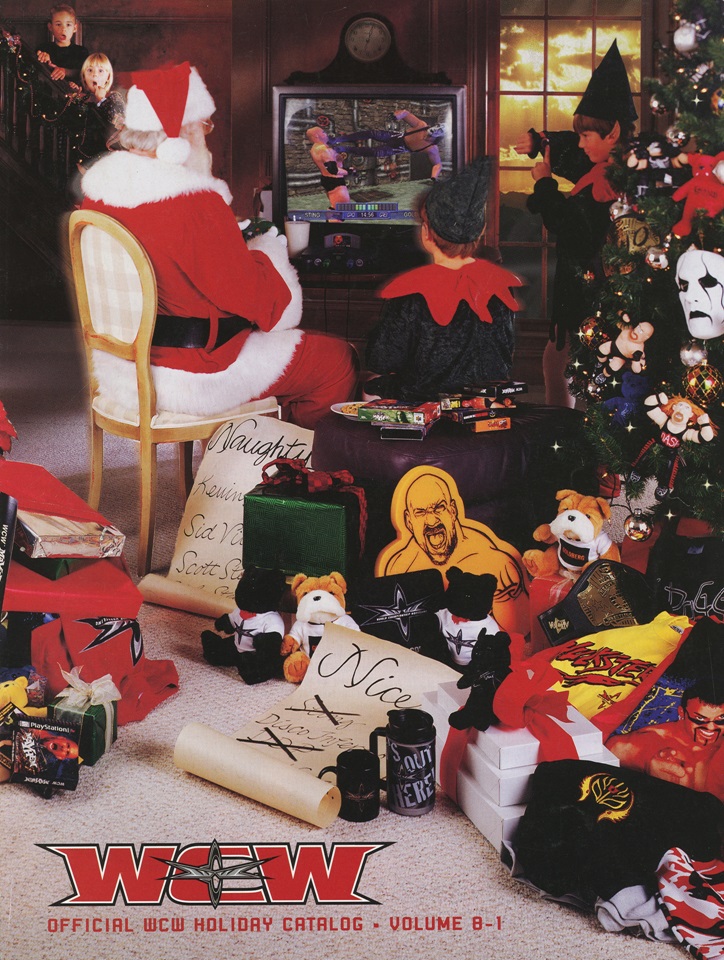 Christmas and the Holidays are here, time to whip out the ol’ WCW end-of-year catalog to mark down what wrestling goodies we want Santa to bring. Inside are several pages of forgotten and now hard-to-find merchandise that go beyond the usual shirts and toys. Holiday ornaments, beanie baby knockoffs, and more! 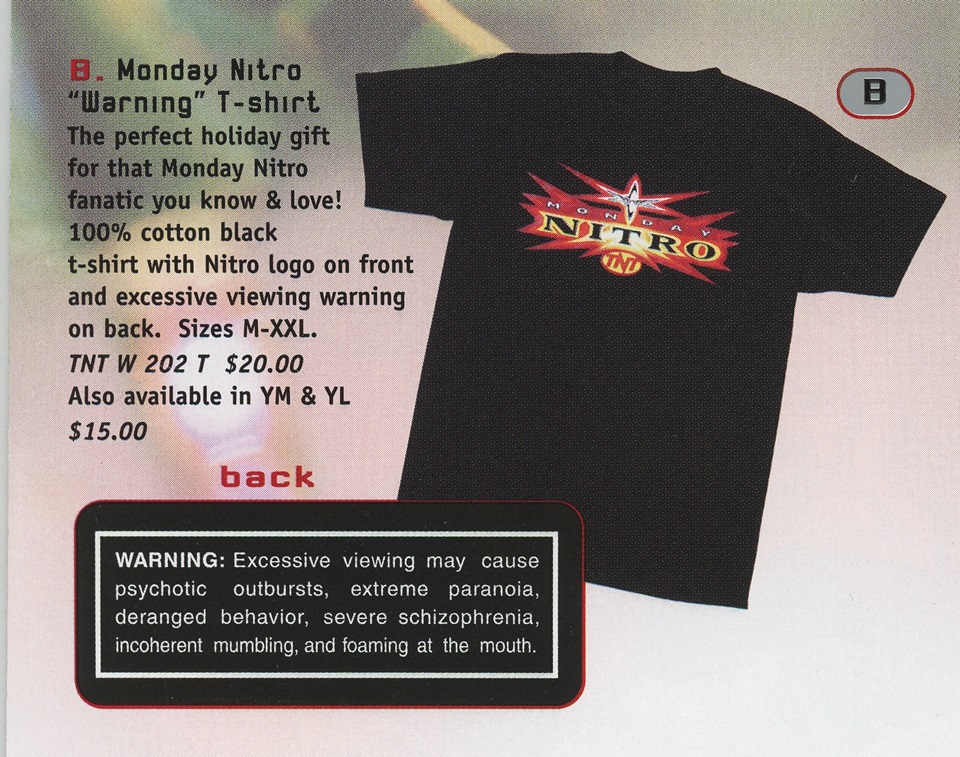 1999 saw the end of the classic WCW logo, and the introduction to the new STARBURST logo, seen here on a Nitro shirt. Since professional wrestling in the 90’s was so extreme, the shirt has a matching back design that lays out what viewing professional wrestling does to a young mind. Psychotic outbursts, deranged behavior, foaming at the mouth??

If watching Nitro was terrible for your health, imagine being backstage at it every week. Someone should’ve warned Al Green about the potential dangers, his brain was totally melted by the end of the year. 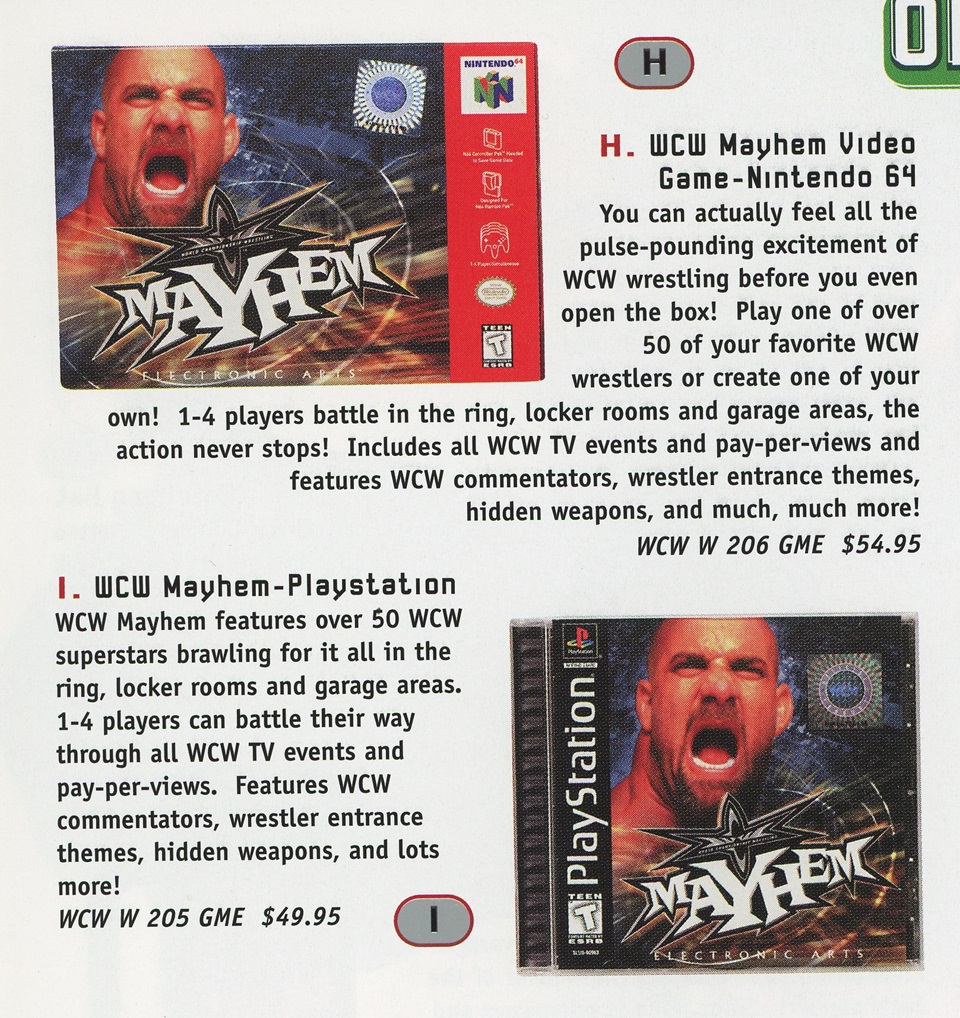 Featured on the front cover, WCW Mayhem is the hot new video game shown being played by Santa and his elf. This was the first Nintendo 64 WCW title that wasn’t put out by THQ as the rights of WCW had been acquired by EA in early 1998. However during that time, THQ ended up releasing the world champion of wrestling video games in WCW/nWo Revenge, so EA had something to prove with their initial entry. Visually, Mayhem was an upgrade to what we were used to, and the title incorporated a lot more real-life audio in form of Schiavone/Heenan commentary and wrestlers’ entrance themes… but that’s about all it had going for it. Sloppy controls, poor gameplay design and questionable hit detection really kept this one from shining. 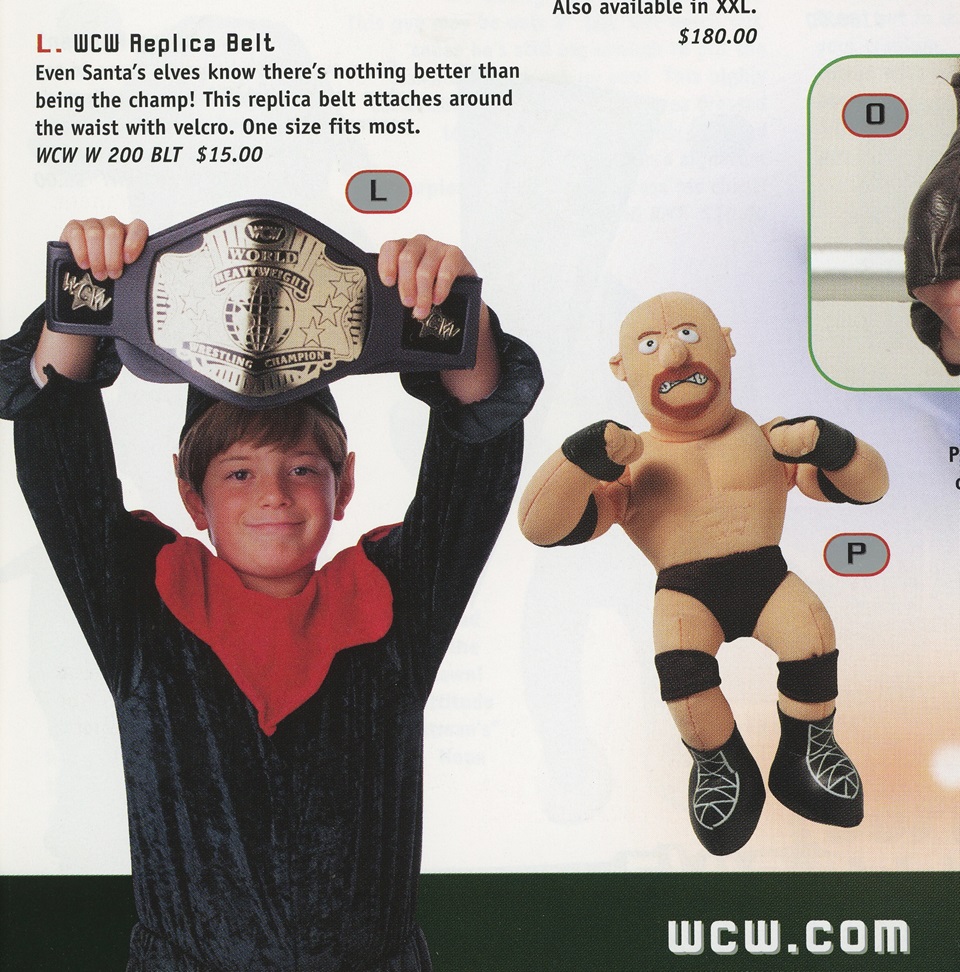 Always found it strange how the foam WCW title was always the early 90’s version of the world championship and not Big Gold. According to the Big Gold book, there were no copyright issues with that belt design, so WCW was free to do whatever they wanted with the title despite it originating back to the NWA days. IIRC, the only person who made wearable cheapie Big Gold Belts were Manley Toy Quest around 1999. There was a version of the title packed into their Action Sets, which featured items to play dress up as your favorite wrestler, and an electronic talking version of Big Gold:

There might have been another foam Big Gold that was packed into a WCW children’s party set, but my memory and Google searches are failing me. The point still stands, if you went to a WCW live event, the only foam titles I ever saw for sale were the ones that the elf above is holding! Also, the less said about the WCW Bean Bag Brawlers, the better, but I know there’s a hardcore group of toy collectors that are hunting down the rarer ones from 2000. Nash, Goldberg, Sting, and Bret Hart are the more common ones, I believe. It’s the Jeff Jarrett, Booker, Buff Bagwell and Scott Steiner ones that go for $$$ nowadays.

The Vampiro ones are all worthless, so if you have any of those, get in contact with me, and I’ll take it off your hands for nothing. Consider it a favor. 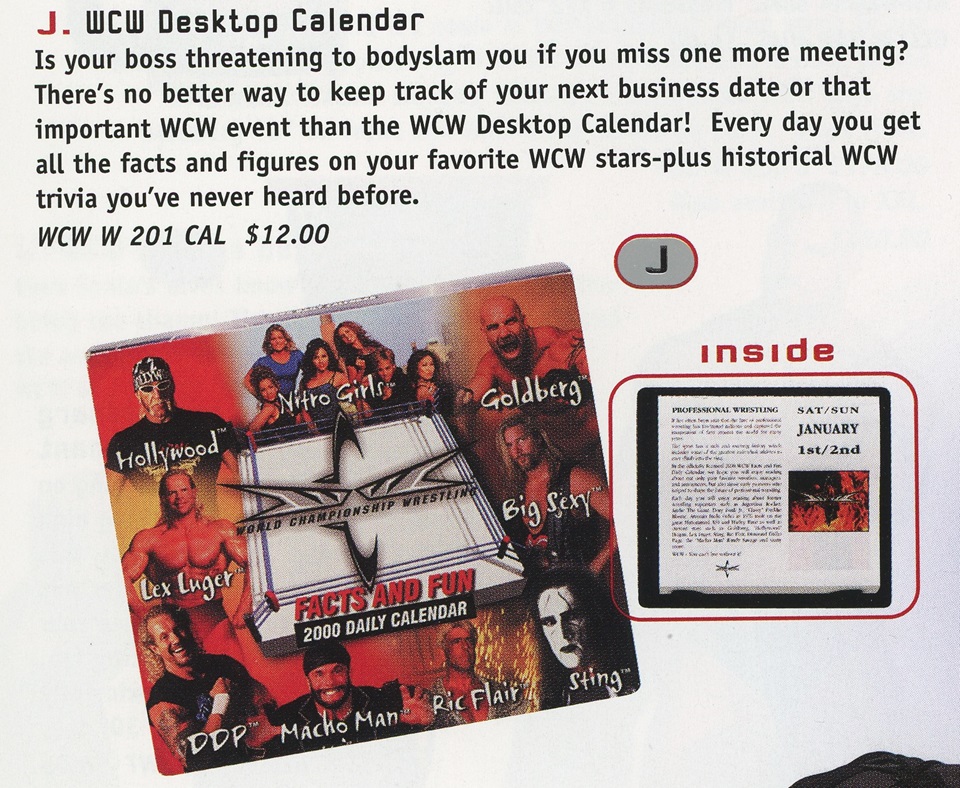 Nothing says professionalism at the workplace than a WCW desktop calendar! I got this off eBay a while back, and I’m actually surprised at how well put together it all is. The amount of work done by Chad Damiani for something like this is impressive considering how few would’ve seen the finished product. It’s something I’ve been wanting to scan but the daunting task of it all keeps me from ripping it apart.

Instead, just know and remember that April 20th will forever and always be Brad Armstong Day. 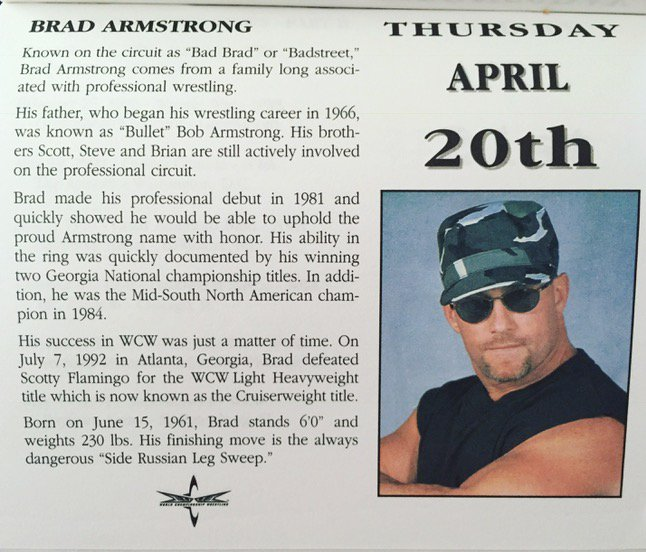 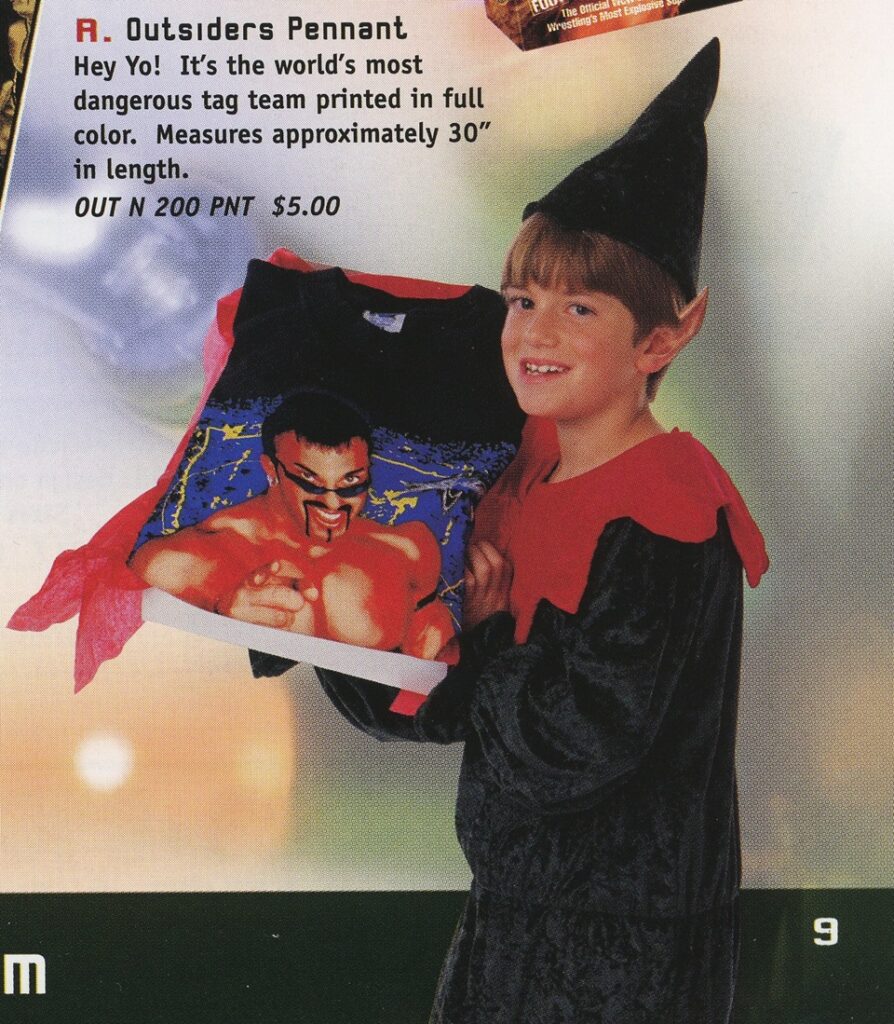 Just like getting socks for Christmas. I’m so, so sorry. 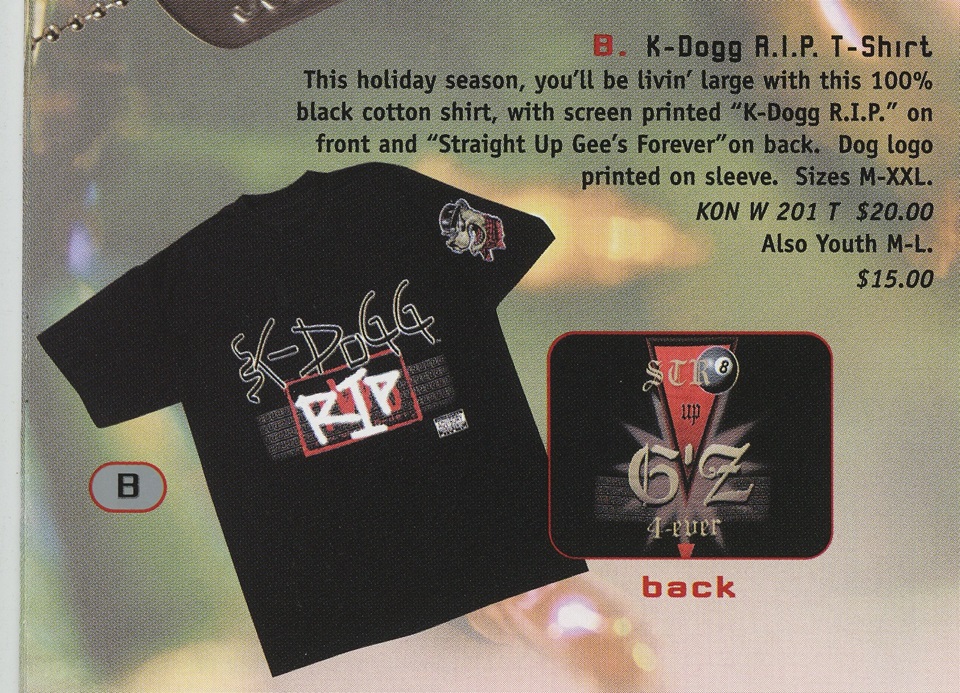 The WWE’s version of wrestling history has seemingly completely erased Konnan from the list of top WCW stars back from this time-frame. If they ever go beyond the roster of WCW World Champions, it’s usually an Eddie Guerrero or Rey Mysterio mention but never K-Dogg who was completely on fire in 98/99. This hilariously captioned “Straight Up Gee’s Forever” marked the death of the nWo Wolfpac after Lex Luger turned on Konnan during the nWo Elite formation. Here’s a closer look of that Wolf cartoon on the shirt sleeve that’s hard to make out in this catalog:

You better be into being in this fandom for the long hauls, boys. You’ll never get out.

Flip through the catalog and comment below on the items that you’d give an arm and leg to own nowadays. Some of these are actually tough to find, I can’t recall seeing that “Goldberg Man or Machine” shirt ever on eBay. I’d imagine that Hogan pennant would probably fetch something around $50 to $100 now too. Since it’s the Holidays and all, why don’t you go over to the WCW Worldwide Big Cartel store and pick up our newest pin:

I JUST watched Santa’s Slay for the first time this year, and I feel like there’s a lot there to talk about, so maybe a more in-depth talk about it soon? I mean, it was better than what I expected and the exploding gift gag had me actually laughing out loud at the Looney Tunes shit that was on my screen. Five stars!

I don’t think that Buff shirt is that bad.

Mayhem sucks, but I’d wear that nitro t shirt if it were still in stores

Wish WWE would just do a full retro reprint store for a lot of these designs.

probably leave out the buff bagwell one though……

ABOUT US
A fansite that celebrates all things World Championship Wrestling. Website maintained by Bryan Barrera in Austin, TX.
Contact us: fanmail@wcwworldwide.com
FOLLOW US
wpDiscuz
6
0
Would love your thoughts, please comment.x
()
x
| Reply