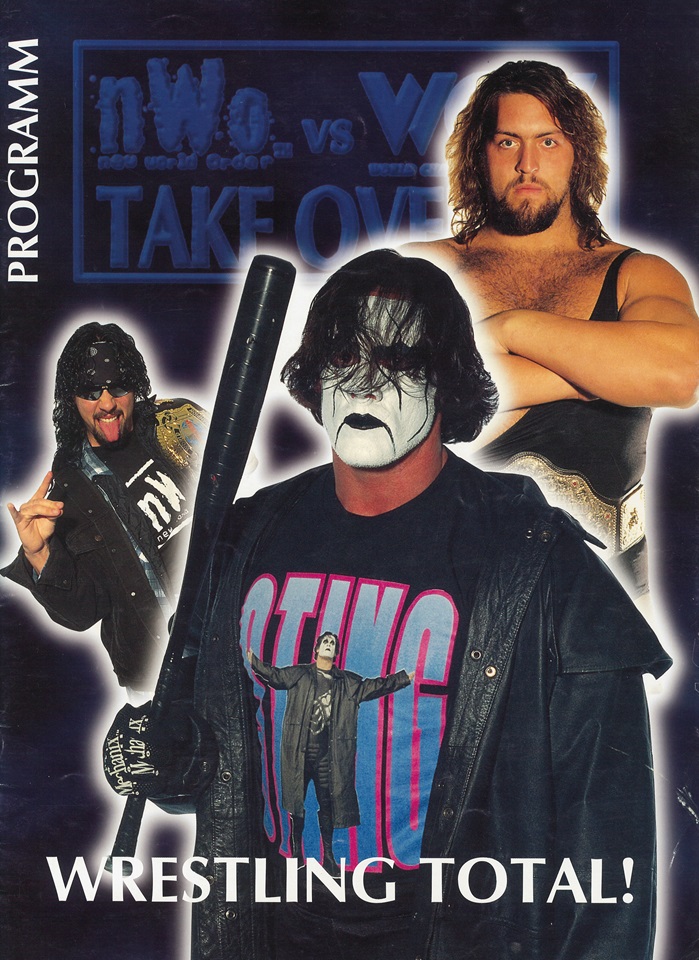 A hard-to-obtain piece of wrestling merch here, the program for the German WCW tour from summer 1997. Included are several promotional photos that I’ve never seen outside of this program, including one of The Giant wearing the WCW World Heavyweight Championship. This is interesting due to the fact that I cannot recall seeing ANY promotional photos of Giant as champion (WCW was weirdly lax when it came to getting shots like this), but The Giant hadn’t been champion for close to a year when they toured Germany.

As far as I can tell, the nWo vs WCW: Takeover ’97 Tour just had three stops overseas with only one show being televised on DSF TV. WCW World Heavyweight Champion Hollywood Hogan wasn’t anywhere near Germany during the tour, so fans were treated to The Outsiders defending the WCW World Tag Team Championship titles against The Giant and Lex Luger every night. Kevin Sullivan, Jacqueline and Jimmy Hart are also featured in the program, but Chris Benoit would end up being paired against Meng on all three of these shows.

The program is also missing both Madusa and Luna Vachon who represented the WCW Women’s division on these cards. Luna had a short stint for the promotion, wrestling only five matches all against Madusa with three of them being on this tour. While it’s sad that the WCW women didn’t get love in this program, I guess getting Michael Wallstreet and a pullout poster of Luger with The Giant makes up for it.

German speaking fans, feel free to email me any translations for future updates on this post! Fanmail@WCWworldwide.com!