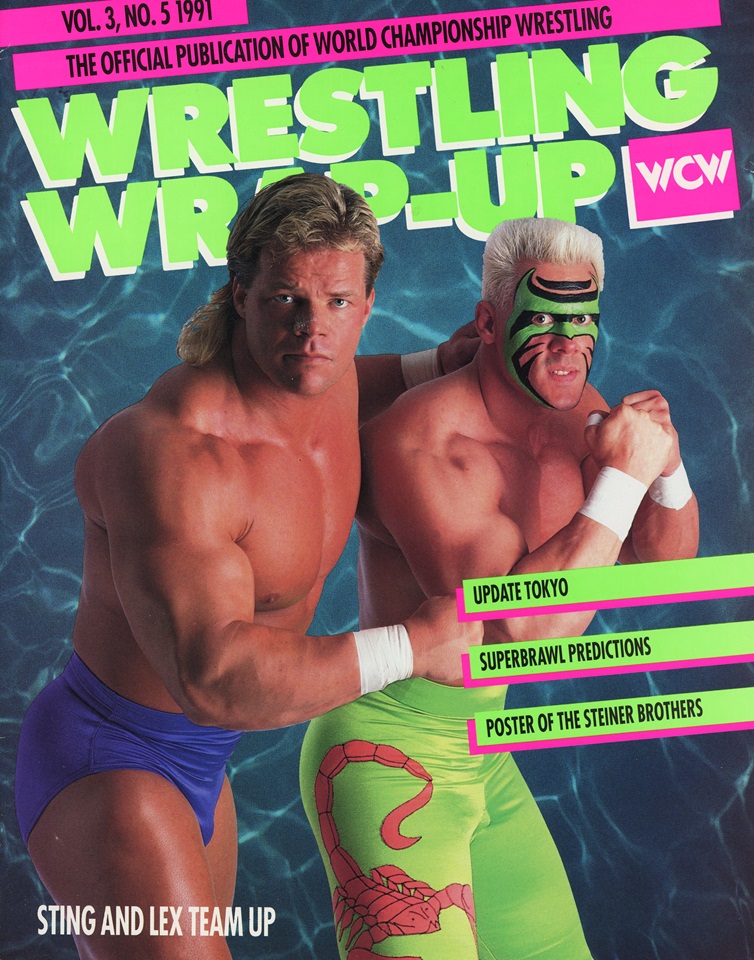 Maybe! Their on-again, off-again relationship over the years was always a fun thing to watch unfold on WCW television. The highlight for me was around the early Nitro episodes where The Stinger was just too dumb to realize that his tag-team partner Lex is an actual conniving POS. The idea of Sting being nothing more than an over-enthusiastic doofus with the memory of a goldfish and an added unwavering trust of others was never more apparent than when he teamed up with Luger during that era. At one point, Lex had turned on Hulk Hogan and could possibly be considered an unofficial member of the Dungeon of Doom… but Sting didn’t care. Lex was HIS friend, and he wasn’t going to turn his back on him, especially when they were gunning for the WCW World Tag Team Championships.

In Lex Luger’s book, he talks up his real-life friendship with Steve Bordon and how things between them strained a bit whenever Sting became a born-again Christian around 98/99. It seemed a bit weird to read on paper, but I guess I don’t find it THAT hard to believe that Luger would be jealous of Sting choosing Jesus over popping pills and shooting down Coors with the “Total Package”. For anybody wondering, Luger’s book isn’t worth your time reading but the one thing that honestly shines through more than anything else in it is how Luger was always and only focused on one thing: himself.

Still though, Lex Luger and Sting were always a good pair together. Despite their constant teaming up with one another throughout their careers, the two only managed to capture the tag titles together only once in 1996 against Harlem Heat. They were a constant in WCW throughout the promotion’s existence, save for a brief moment when Luger went to the World Wrestling Federation to be a new Hulk Hogan for Vince McMahon.

One of the more interesting features including in this magazine are the predictions made for the upcoming WCW SuperBrawl, specifically one match that ended up being one of the worst stinkers of all time. It seems like even the writers for WCW Wrestling Wrap-Up weren’t too sure what to expect over the Sid vs El Gigante in a Stretcher Match:

“WOW! What in the world will happen here? So far, 100% of Sid Vicious’ opponents on television have been gurneyed out! Sid Vicious has even ordered a special 8′ gurney just for this event! Vicious is a fire-breathing monster while El Gigante is the tallest athlete in the world who looks like he himself is ready to explode, and it looks like he’s going to do it all over Sid Vicious. It is hard to imagine EITHER of these huge wrestlers being beaten to the point of being gurneyed out, but I don’t think Sid Vicious can defeat El Gigante, when it comes right down to it. But Vicious has the experience, as well as the pure sadistic tendencies for which the Giant may not be ready. This match will be unbelievably brutal!”

And BRUTAL is the right word for it! Not only did the match change its rules beforehand to where a victory could be attained via pinfall, the billed battle of the monsters lasted not much longer than two minutes with Sid taking the loss being pinned down by an El Gigante iron claw.

El Gigante just being inside a wrestling ring was already set up a huge handicap for WCW to overcome, but the news of Sid Vicious leaving the company had them scrambling here. Vicious wasn’t going to get gurneyed out, so instead, WCW did a quick mercy-killing of Sid. After the match ended, Sid Vicious disappeared so that One Man Gang and Kevin Sullivan could run out just to get thrashed for a bit by Gigante. The Argentinian Giant prevails!

Within three months, fans would see SID JUSTICE and his perfect mullet appear in the World Wrestling Federation.