And with that sign-off from Scott Hudson, World Championship Wrestling was no more. This final episode of WCW Worldwide aired after the infamous WCW Monday Nitro where Vince McMahon announced his purchase of WCW making Worldwide the last breath of the wrestling promotion. It’s definitely not an anniversary that is really remembered often either. By this time, WCW Worldwide had moved from being a weekly broadcast of in-ring matches and instead was more of a Nitro/Thunder/PPV recap show. The days of random match-ups like Vampiro vs Crowbar or Major Gunns, Paisley and Tygress in a Triangle match were done. If you weren’t watching the Hudson and Mike Tenay recap episodes in 2001, I don’t think anybody would fault you for that. This grainy black/white clip is the only copy of the final WCW Worldwide that has publicly survived since 2001. I’m not really holding my breath either for a cleaner copy to ever emerge, I think this is best we’ll ever get.

On a recent episode of the Sitting Ringside podcast, Scott Hudson explained how that final taping went for him and what he knew whenever he gave his final sendoff:

Scott Hudson: “We taped ‘Worldwide’ on Wednesdays. It aired probably the weekend after ‘Nitro’. We taped it Wednesday, ‘Nitro’ [on] Monday, the next weekend is when those ‘Worldwides’ would air in syndication. We would go back in and edit in some ‘Nitro’ stuff.

We did two endings for that show, both of them were two-and-a-half minutes long or whatever that was. One of them was the one that aired which was, ‘We’re done. We’re closing up shop. We’re setting the circus down. We’ll see you all down the road.’ or whatever and the other one was, ‘Get ready for the launch of the NEW WCW. Bigger and better than you’ve ever experienced and we’ll have more about that next week!’

They had to pick which one to air, and it was the one that said we were gone.” – Sitting Ringside with David Penzer [March 11th, 2019]

I can’t imagine that feeling of uncertainty that certain WCW employees were going through at the end of it all. On one hand, you have people like Bruce Prichard and Shane McMahon there telling everything that the WWF has plans to bring back WCW after a while. On the other hand, there was no guarantee for anyone that they would be included in whatever theoretical plans that ultimately never came to be.

Scott Hudson would mention how he spent his final night of TBS employment with Tony Schiavone as they shared wrestling stories on the drive back to Atlanta after the final WCW Monday Nitro. The following morning, all WCW personnel were called into a meeting at the WCW Power Plant where a majority of them were terminated on the spot (fired from their employment, that is). All of their work computers were wiped and everyone was shaken down by the WWF security to ensure that no one left the building with anything but their personal items. World Championship Wrestling was dead and gone, but it had one this final message to give a few days later:

Scott Hudson: “And this wraps up ‘WCW Worldwide’. Not just for this week, but forever and a day. WCW gone, ‘Worldwide’ gone. We want to thank you for joining us each and every week here on ‘WCW Worldwide’. What a great crew we’ve had. It’s been a lot of fun taping these shows, and you can see we have a really good time. For Mike Tenay, I’m Scott Hudson, we’ll see you down the road somewhere else. Thanks for watching ‘Worldwide’.” – WCW Worldwide [March 31st, 2001]

Well, well,well… looks like I spoke way too soon.

After posting this, a fan of the site reached out on Twitter with a bit of video from his personal archives:

Saw your post and decided to go through my tapes from that time period and look what I found. pic.twitter.com/E7eqWMLJNv

There you go! The complete, final sound off for World Championship Wrestling in full color! Hudson says his piece, credits roll as the entire set is disassembled and sold for parts. We will see you never, folks! That’s our time!! 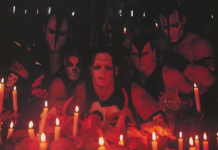