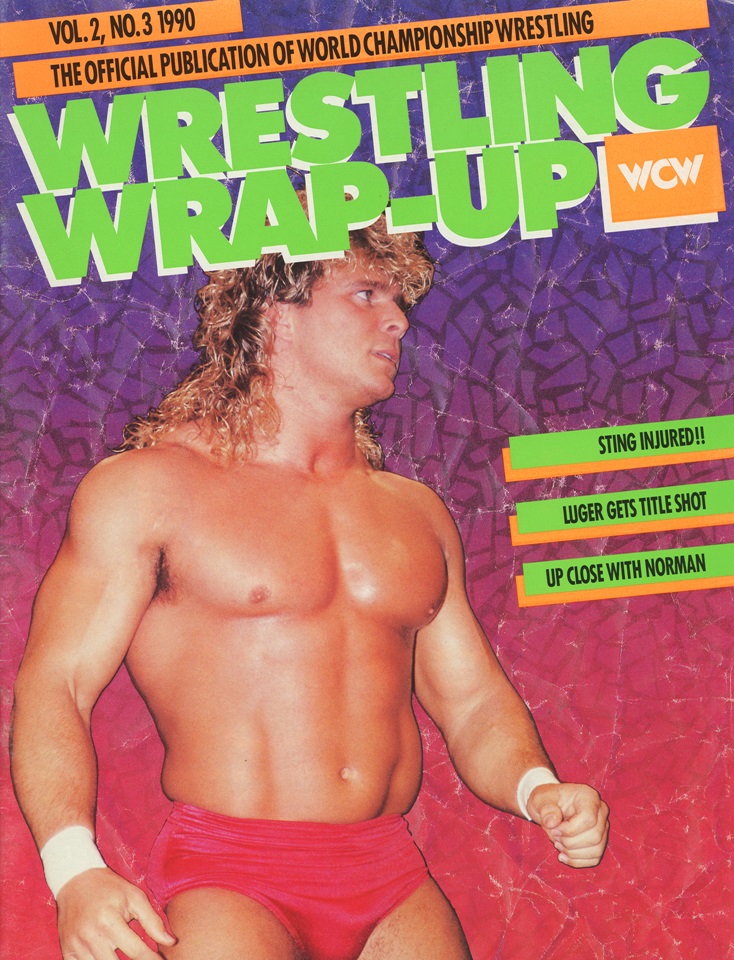 Breaking news! Sting has been injured by The Horsemen after an unprovoked attack and will be out for SIX MONTHS!

This actual legit injury to The Stinger curtailed his WCW title chase, but it definitely didn’t keep him from eventually becoming the main event star and face for the company. His title dreams just were put on hold while WCW started to look at Lex Luger becoming their new main guy. Also, this issue is the first instance of the NWA being taken out of the magazine’s title. It is now officially WCW Wrestling Wrap-Up!

Interesting that Brian Pillman is given the entire cover when his feature is about him and Zenk winning the NWA/WCW US Tag Team Championships from The Freebirds. No good shots of them with their titles though, maybe next month.

Norman gets some major love in this issue, for whatever reasons. Maybe you just had to be there week-to-week to be into him as these issues always seem to have some sort of update whether he’s a lunatic or a trucker or whatever the fuck. Also, some dude named Cactus Jack Manson is coming to WCW. Who knows what he’s about… 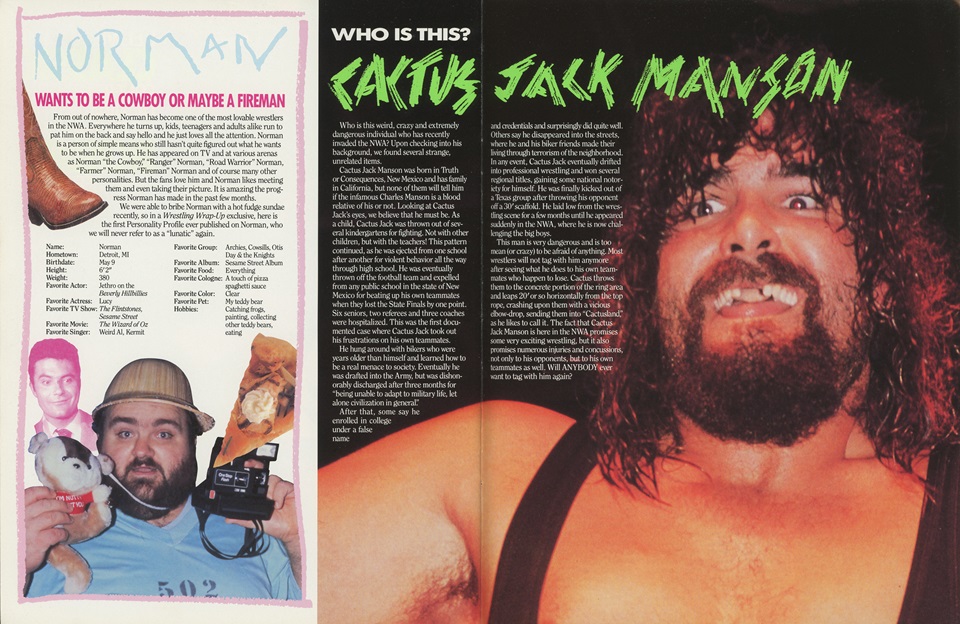 Speaking of which, the MANSON part of his name is something Mick Foley didn’t care too much for. Foley worked as Cactus Jack Manson in the USWA and WCCW, and he would later talk about not being a fan of that moniker staying with him when he moved over to World Championship Wrestling. In a public Facebook apology post to Amanda Saccomanno (later to be known as Mandy Rose) over her actions on WWE Tough Enough, Mick brought up the “Manson” name as one of his career regrets:

Mick Foley: “I shouldn’t have allowed my last name to be ‘Manson’ in World Class and during my first run in WCW. Sure, the name was a surprise when I walked down the aisle of the Sportatorium in Dallas for the first time, and heard my name announced as “Cactus Jack Manson”. It bothered me, but not enough to risk my job over it – and I eventually played into it…even though I knew in my heart that playing into the image of a notorious murderer like Charles Manson was dubious, at best. [2016]

I don’t recall if this is brought up in any of his books (and my copies are currently stored away in my garage), but I have seen people online claim that he even refuses to sign anything with the MANSON name. When you consider the Good Guy Foley image he tries to portray online and the fact that he’s never even tweeted anything about “Manson” over the past eight years of his Twitter’s existence, I think it’s just something he’d rather not call attention to.

Next magazine update this week will be that 1992 NJPW Special I mentioned at the end of the Muta post yesterday. It should be up by the end of the week!