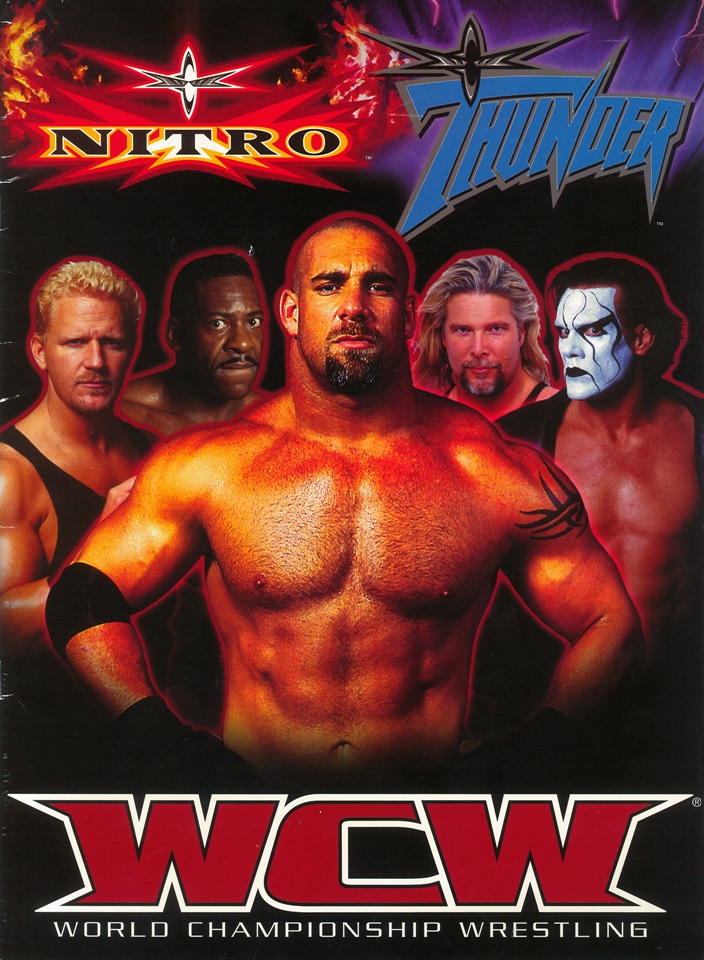 Last month, I came across a pretty cool eBay find in this Australian WCW Tour program. World Championship Wrestling made its first trek to the country in October 2000 and received a warm welcome during their week there. The Nitro taping saw a legit sell-out of over 10,000 and another sell-out of 12,000 on the final night in Melbourne.

Not sure if I’m a fan of the layout included in this program, but there are a lot of great shots that you really don’t see often. Nash in a F.U.N.B. shirt? I’m all about it. A weirdly high amount of references to other television shows the wrestlers have appeared on to ensure you’re aware how big of a deal these people are? Very cool. WCW was even still at the point where they were acknowledging Ready to Rumble as an actual achievement for the company, not a embarrassing misstep!

Some of the fonts included are too tiny to be easily read with my WordPress uploads, so maybe consider downloading the files directly through the links below.

Also, you cannot bring up the Australian WCW tour without mentioning the major incident that occurred the first night out that cast the company in a negative light through Australian media.

Wade Keller: “Juventud Guererra was fired by WCW during the Australian tour due to a drug-crazed outburst. The incident took place Oct. 7 at the Brisbane Marriott Hotel and ended with Juventud stripping naked, throwing chairs, and being arrested by 20 police officers. All the while he was shouting, “I’ll kill you” at various WCW employees whom he irrationally was blaming for something. Twenty police officers responded to the incident at about 11:30 a.m. and about six officers and capsicum spray were needed to subdue Guererra.” – ‘Pro Wrestling Torch’ #624 [October 21st, 2000]

The twenty-four-year-old Guerrera was arrested, deported from Australia and eventually fired from WCW because of his erratic behavior. Turns out that fighting the police in a drug-induced haze isn’t the best way to endear yourself to a foreign country (or to your employer).

Konnan and MSL from MLW.com discussed the entire incident in great detail a few years back on their podcast as Konnan was there the entire night alongside Juventud. He saw it all and explains what went down:

Konnan: “[T]hat night, I remember, that we were mad at Juvi. Me and Rey Mysterio, we were mad at him, and we were actually trying to hide from him. We were, I believe, in Melbourne, which is a HUGE city, so we left the show early so Juvi wouldn’t get a ride with us. We actually met up with Jeff Jarrett and one of the Harris Brothers ’cause one of them partied and the other one didn’t, if you know who they are.

So, we were in this club and out of the one million clubs there has to be in Australia, Juventud shows up in the club we’re at. And I’m like, ‘Can you believe this motherfucker?’

And so, we’re hanging out with him and then we went to this after-hours place. At the after-hours, I could smell–and I can’t believe that they were smoking this in L.A., do you know what ‘sherm’ is?”

Konnan: “Sherm is like, fucking, marijuana laced with PCP, and you smoke it. Usually, a lot of people here in–I’d never even seen sherm in Miami, I saw it in California for the first time, but basically, a lot of drug/gang-bangers will use it before they fight because they can’t feel shit or if they got to do something really crazy like a 187 or whatever, they’ll get sherm’d up. They’ll get really fucked up. So, I know what it smells like, and you know PCP is angeldust, right?”

Konnan: “Ok, so imagine marijuana and angeldust mixed. That’s what they fucking smoked. So, we were at this after-hours house party or some shit and I could smell sherm, and I was like, ‘Jesus Christ…’

Well, Juventud like a dumbass went over there, and he smoked it.

By this time, it was nine o’clock in the morning that we were finally getting back to the hotel. So we’re getting back to the hotel and, you know, it’s breakfast, dude. We were about to pass the breakfast, we were just about to pass where the people eat breakfast and Juvi starts going off that he can see, fucking, in the future and all this other shit. He starts taking his clothes off, and he throws it into the fucking river, and he’s fucking just going nuts, bro. Fit Finlay came down. Terry Taylor came down. Everybody was coming down.

Fit Finlay is a tough guy, and he wouldn’t even deal with Juvi, he knew Juvi was crazy. They were like, ‘Put him in the room’, and I go, ‘Fuck, I’m afraid he might jump out a window’ or some shit, you know?

And the next thing you know, the cops came, and he fucking tackled a cop. Speared a female cop and broke her ribs. They were trying to fucking put the hand-cuffs on him, but he was sweaty, really sweaty, and he was really thin and light. He looked like a fucking squeal–he looked fucking like an oily pig that you’re trying to catch him and shit. They couldn’t grab a hold of him. They finally got him, hand-cuffed him, they had to mace his ass.

Wade Keller: “Among others who suffered minor injuries were several bystanders who were affected by the capsicum spray. Guererra was placed in a padded cell and charged with three counts of assault, disorderly conduct, indecent exposure, obstructing police, and possession of a drug. Police found two green pills in his possession deemed to be ecstasy. WCW spokeswoman Sharon Sidello said Juventud would be sent home. “It’s certainly unfortunate and unexpected,” she said. “The group is usually well behaved.” The incident received considerable coverage on Australia’s Ch. 7 evening news, which showed a naked Juventud being dragged away naked with only slight pixilation to distort his nudity.” – PW Torch #624 [October 21st, 2000]

Yesterday while teasing this story, even Mark Madden had to pipe in on his memories of the night:

Oh, ***k…I was there for that. "I came into this world naked, &I'm going out naked." As I recalled, a cop went to mace Juvi, he ducked, &the cop maced his partner. It was like a Midnight Express spot.