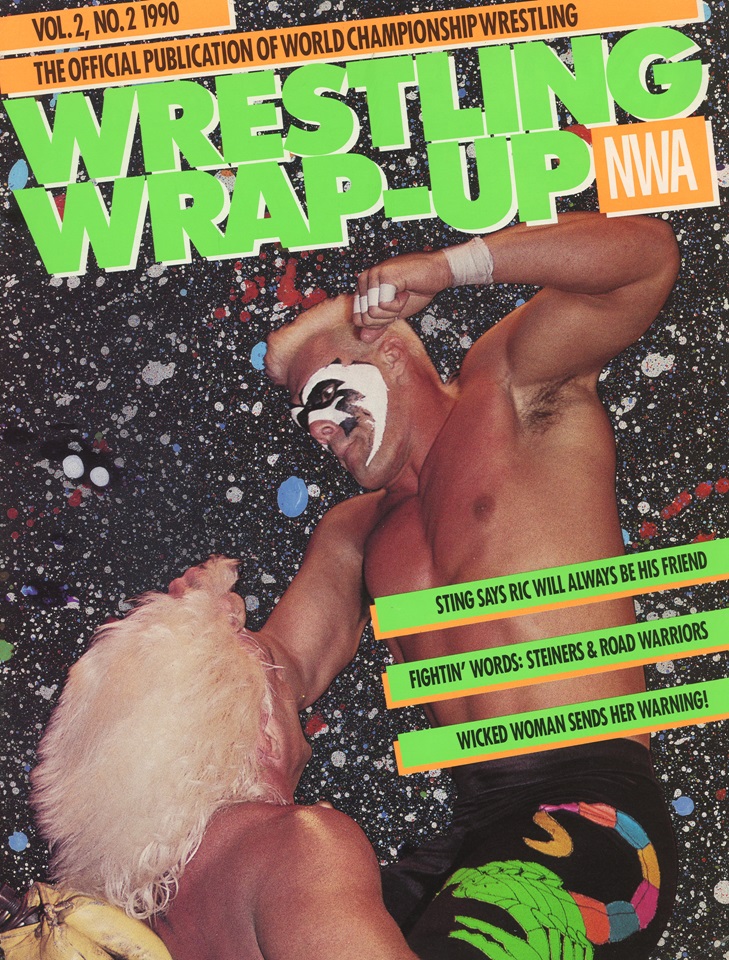 Big laughs at this cover, “STING SAYS RIC WILL ALWAYS BE HIS FRIEND”.

When this issue of NWA Wrestling Wrap-Up was sent out, Flair and the Horsemen had already turned on Sting and he’d be taken out completely with an injury. Luckily, WCW had someone in their back pocket named Lex Luger that could take the spotlight for a little while…

This era of World Championship Wrestling is one of my favorites to go back and watch specifically due to it all being new to me. This would have been the time that the NES game caught my attention and introduced me to all of these characters, but I still didn’t have cable yet. I wouldn’t really see any WCW until a year or so later whenever a local Blockbuster Video started stocking 1992 pay-per-view tapes for rental. It’s always interesting to see who WCW had high hopes with by seeing who beyond the Flairs and Road Warriors were getting merchandise made for them. In this issue, we see the first wave of Brian Pillman, Dynamic Dudes and Tom Zenk items I’ve seen in these catalogs. Zenk even gets his own pull-out poster!

Zenk was a wrestler that was completely unknown to me until I started to collect these older magazines. It was soon after whenever I was introduced to the weird place that was TomZenk.net that would collect any and all mentions of Zenk made online by myself and others for their site. For the longest time, I thought that it was Zenk himself using the blog space as a sort of online scrap book, but it’s still being updated even after Zenk’s passing in 2017. I think I’ll email whoever “rasslinfan” is on their site and let them know I still am thinking about them.

As for Zenk himself, I have become a fan after going back and watching his matches. From All Japan, WWF and WCW, he had everything he needed to be a top star. Unfortunately, bad timing, injuries and backstage conflicts with the powers-that-be kept him from really getting on top in WCW.

I had Zenk’s trading card. His quote? “Stay single!”

Z-Man tearing it up!

What a dope the Stinger was

I used to own all of these and bummed I sold them all in like 97. Thanks for uploading them.

Also, I remember Zman as he was happening and I could not stand him. I felt they killed Pillman’s single push when they teamed them up as blonde/dark hair rock n roll team.