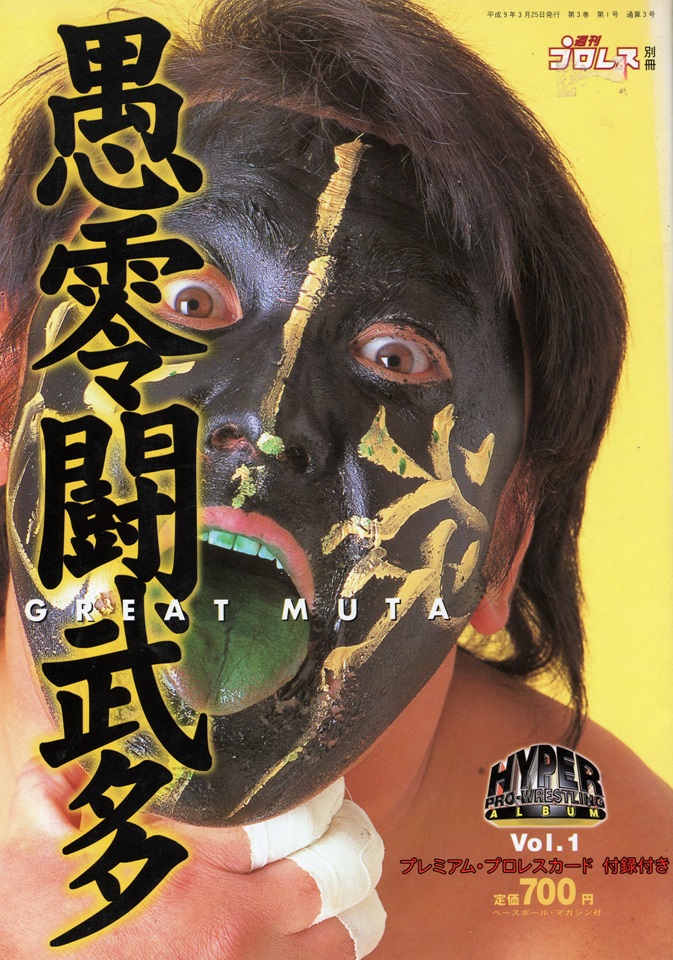 I have a couple of Japanese wrestling magazines ready to upload here with the first one being a special that focuses on the career of The Great Muta up to 1997. I’ve mentioned this before in previous posts but Muta is a HUGE blind spot for me. I only watched his matches live whenever he showed back up in WCW in 1999/2000, I didn’t have a history with him at all. I’ve seen a handful of him through the WWE Network, but everything I know about him is all through second-hand stories on social media. Great look and hugely influential, I know… but don’t ask me to rank my top five favorite matches of his.

Big regret is not paying for a photo or autograph at the one WrestleCon I saw him at here in Dallas. He had zero line and was just hanging out. The whole con experience was over whelming, and I only popped in to hopefully grab some vintage merch from booths. I honestly did not want to bore my girlfriend by waiting in lines for any meet-and-greets (plus we had touristy plans!). That said, Muta was right there, and I just passed over him. We did get a impromptu meet-and-greet with Sonjay Dutt and Brian Myers (who pulled us into his group so he could ogle the Pro Wrestling Illustrated magazines I had under my arm).

One of these days, I’ll have to do a Muta run of matches and only feel worse over jetting out of WrestleCon early so we could walk Dealey Plaza. We live in Austin! We could do that any time!!

Still though, this is a great history of the man’s career up to 1997, so enjoy the AMAZING pictures and I hope I uploaded the format correctly. Magazine is numbered sequentially to be read right to left but the table of contents is at the end of the magazine?? I don’t know, I tried to upload these photos in the correct order so if you did read Japanese, you could follow along with no hassle.

Next magazine scans I’ll have up here this week is a New Japan Pro Wrestling magazine ft. the new 1992 NWA World Heavyweight Champion Masahiro Chono on the cover! Stay tuned.

Loved Muta! I remember him well in 89 and 90… Too bad he never got a bigger push in WCW… I blame Gary Hart for that.