I think it’s safe to say that most wrestling fans love a good tournament. With the WWF’s King of the Ring pay per view running every summer, WCW thought it’d be a good idea to get a jump start on tournament season in 1995 and hold its own 16-man tournament to crown a new United States champion (Note – I have no idea if that was the motivation or not, but it fits).

On March 25th, Nick Bockwinkle stripped Vader of the US Title after Vader’s brutal attack on Dave Sullivan the week before.

This set up the tournament and only someone without a soul wouldn’t get excited for brackets on TV. 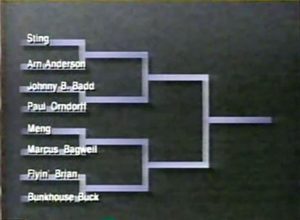 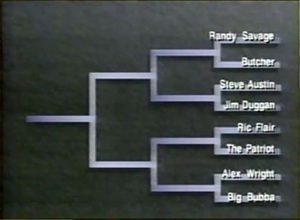 There were some interesting variables. You had the odds on favorite Sting and the undefeated monster Meng on one side of the bracket. On the other side, we had Randy Savage and Ric Flair.

The tournament started on the April 22nd edition of WCW Saturday Night with Brian Pillman vs Bunkhouse Buck and concluded at the Great American Bash on June 18th.

The embedded video at the top of the article recaps all of the action from the tournament (including the finals). Chris Cruise and Gordon Solie (just weeks before leaving WCW) lend their talents as they fill us in on the progress of the tournament.

If at the end of the video, Stevie Richards’ WCW theme doesn’t loop over and over in your head, you’re made of heartier stock than I am.

P.S. This tournament featured Steve Austin’s last name win in WCW which set up the only and only match pitting Randy Savage against Steve Austin. Certainly worth a look for the history alone.

This would then lead up to the scheduled Randy Savage vs Ric Flair match that never got underway. On the bright side, we were treated to a rare look backstage at Center Stage.