Home Video On This Day: Sting vs Jeff Hardy at TNA Victory Road 11...

The infamous TNA match where Jeff Hardy showed up completely unable to compete during his main event championship match and was defeated in one move by Sting. Hardy was missing backstage during the PPV and once he was found, he had to be carried over to gorilla position where Eric Bischoff and other TNA agents noted Hardy’s state. Based on how slow Hardy is during his own entrance, it’s safe to assume that Eric Bischoff called an audible right then and there to make this PPV match last as long as it does — one minute and twenty-eight seconds.

After the match, Sting can be seen responding to the crowd’s boos and chants of bullshit with “I agree”.

Jeff Hardy was sent home after the embarrassing match-up with Sting and coincidentally saw himself in court soon after to face felony drug trafficking charges from an arrest in 2009. Hardy would eventually plead guilty and serve ten days in jail with probation and rehab requirements attached to his sentence.

In a 2014 interview with MainEventRadio, Jeff Hardy shared his thoughts on Victory Road 11:

“Host: So you mentioned Victory Road 2011. I would assume that that had to be the worst night of your career. What was your mindset going into it?

Jeff Hardy: I didn’t have a mindset, I was too fucked up to even try to get through the match. It’s terrifying when you see yourself on video, not knowing how bad you were. It’s embarrassing, it’s terrifying, and a huge letdown for the fans. Everything bad within me pretty much died that night. Me seeing myself in that shape just devastated me. Thank God [TNA] didn’t fire me, they could’ve. I went on with my case, my judgement — which is why 2012 was so special to me.”

“Host: When you came back later that year, how did it feel to be so forgiven and embraced by the fans?

When I did return, I had to go in and pretty much apologize to the locker room and do a little speech. I was so nervous, I could barely talk. It was horrible, but I went in there and got through it, I begged for forgiveness. I begged for one more chance. The song “Resurrected” is all about that one more chance and not letting you down. I came out of that hole, that dark situation better than ever.”

Sting also had much to say about his TNA Championship with Jeff Hardy and spoke to Fighting Spirit Magazine in 2012 about it:

FSM: It was obviously a very difficult situation that occurred with Jeff Hardy at Victory Road, where you won back the TNA title. You were visibly disappointed at what had occurred in the ring, so can you talk us through your feelings at the time?

Sting: I knew that there was trouble a couple hours before the match, and as the night progressed, it seemed to get worse. I had high hopes that by some miracle it would pan out, and we would be able to actually have a match, because we had something pretty good worked out. But it didn’t happen that way; it just deteriorated, and got to the point that what happened had to happen. I knew going into it that if it had to happen like that, then you’ve got people who are buying the pay-per-view who would be disgruntled. You’d have a live audience that’s pissed off and confused, as well as the wrestlers in the back.

The ripple effect is gigantic – it affects a lot of people. My heart goes out to Jeff, and I’m glad that he’s on the trail back. He seems to be great; I’ve talked to him a couple of times, and he seems really, really good, and he is remorseful. But, he understands that his words mean nothing at this point – time is going to be the only thing… (pauses) He’s going to have to build the bridge of trust back one brick at a time, and he knows it. He’s an incredible, unbelievably talented wrestler; he’s creative, innovative, and he’s got so much going for him, and if he can keep his head on straight, I know that there’s a lot of good years in front of him, and he’ll be a benefit to [TNA].

I’ve always been amazed at how much of a mess that this match is and how terrible it ended up playing out on television. Eric Bischoff coming out to the ring and calling for the No-DQ stipulation all while possibly laying out his plans to cut the match to an immediate finish might not have been the best option to go with. Then again after seeing how rough Jeff Hardy was in this clip, maybe there wasn’t any other path to take. Having another person added to the main event match or even having someone take Hardy out during his entrance could’ve also led to another disaster seeing how impaired he was.

Despite getting himself cleaned up and living a cleaner life, this match will always be something that Jeff Hardy will never live down. Shame that Sting had to end up being the other half of this match-up and being forever attached to this monumental blunder of a championship bout. 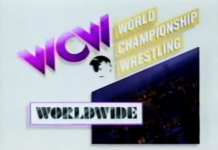 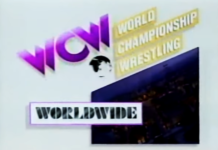 Sting should have knocked all the teeth out of Hardy’s mouth, then sued every single person in that company for letting that happen.

As nice as Sting is, I’m thinking it sometimes can make him turn the other cheek more often than not. I’d be furious over this one, but who really knows what happened backstage afterward regarding him.

Why is this on here? Because of the Sting connection?

Either way, I will be checking out the site. Very neat.

Yup. I focus mostly on WCW but I like to look at things involving WCW related stars in other promotions. Mostly Sting and Flair though…

Can’t be surprised that Sting wasn’t mad at Jeff. I remember Sting saying he forgave Jeff. TNA was going to fire Jeff but Sting went to bat for him and said to keep him because he is a special talent and is an asset to the company.