We recently lost Bobby “The Brain” Heenan at the age of 72, a man who was nothing less than an absolute legend. The Tampa Bay Times reported that Heenan’s cause of death was organ failure brought upon by complications from his throat cancer, a disease that he was diagnosed with back in 2002.

We here at WCW Worldwide wanted to give our thoughts on this incredibly sad event considering how important Heenan was not only to World Championship Wrestling but to the wrestling industry altogether.

Diagnosed with throat cancer in 2002, the last fifteen years of Bobby Heenan’s life were a battle. A fight for survival; “The Brain” fought as long and as valiantly as he could. His early life was no cake walk however. He left school in the seventh grade to get a job and take care of his mother, elderly grandmother and aunt who had been diagnosed with cancer.

After spending a childhood enchanted with pro wrestling, he entered the business in 1960 doing odd jobs, such as carrying wrestlers’ robes to the back. This eventually led to Heenan entering the ring himself, but of course as well know, he found his true calling in managing.

Saying, “Bobby Heenan is the greatest manager of all-time,” is pretty similar to saying, “water is wet.” It’s an objective fact. Even guys like Jim Cornette and Paul Heyman, who are amazing in their own right, are not even in the same ballpark as Heenan. Bobby solidified anyone he touched as an iconic, upper-echelon talent. From his legendary run in the American Wrestling Association (AWA) with Nick Bockwinkle, to his final managerial act, leading the “real world champion” Ric Flair in the WWF; everything The Brain did was gold.

Due to my young age, most of my memories are through hindsight. I really only saw Bobby Heenan in archival footage. Even as a young child, I knew “The Brain” was the man and even my Mom would talk about watching Bobby Heenan when she was a kid. She grew up in Illinois, meaning she watched Bobby’s heyday in the AWA. However, I mostly saw Bobby as a commentator.

In 1994, Bobby Heenan joined Tony Schiavone in the announce booth in WCW. From ’94-’00, Bobby created yet another legacy; being one of the voices of the Monday Night War. Heenan was on commentary for the majority of Nitro’s run. His voiced is spliced over most of the iconic moments in that show’s history. Perhaps his greatest call in WCW was on July 11, 1998, the night Bill Goldberg beat Hollywood Hogan for the WCW Championship. Bobby’s enthusiasm for this moment, made it feel real. Made if feel important. And it also cemented Goldberg as, “DA’ MAN.”

Of course, it’s difficult to talk about Heenan’s legacy without talking about his partnership with Gorilla Monsoon in the WWF. Boot up an episode of Prime Time Wrestling on the WWE Network, and you’ll get the perfect idea of their chemistry and humor.  The 1992 WWF Royal Rumble match is the apex of Heenan and Monsoon; their greatest work.

Bobby Heenan’s legacy in pro wrestling is forever safe. Can anyone really criticize The Brain? If they do, they shouldn’t. He excelled in everything he did. EVERYTHING. Wrestling, managing, commentary, being serious, being funny, being sad; he could do it all.

Everyone has been sharing their favorite Bobby Heenan jokes, one-liners and quips. I however, would like to leave you with my favorite serious quote from Heenan.

“I don’t look at myself as a hero or smart person. I have a seventh-grade education, but I’ve had a lot of fun.”

Thanks for having fun with us, Bobby. Thank for for being one of the voices of my childhood.

Raise some hell with Gorilla.

Like so many other followers of professional wrestling, Bobby Heenan shaped my wrestling fandom like few others. He was one of the first heels I saw who made me smile every time he was on screen. However, that didn’t stop me from pumping my fist a mile high in delight whenever Gorilla Monsoon would put him in his place or guys like the Big Bossman would make The Brain eat his words.

He was a big piece in what made 1980s – 1990s WWF fun. “I can’t believe you watch this crap” was nothing I ever heard when someone was watching wrestling with me. His wit was sharp as a tack, and he bumped like a cartoon character. He did it all to give the fans the best experience he possibly could.

As far as his stay in WCW went, his work in 1994 was top shelf. He was able to rekindle his worship for Ric Flair in the summer. He showed great energy calling events like Spring Stampede, several Clashes, and Halloween Havoc. As silly as the transition from Flair losing his career to the beginning of the Three Faces of Fear angle was, The Brain was marvelous in doing his damndest to keep fans engaged in the idea of Brutus Beefcake ascending the ranks of WCW in one night, “I DON’T WANT A BROTHER LIKE THAT!!!”

Bobby Heenan was a maestro even at the end of his WCW run. During his stint hosting WCW Worldwide with Scott Hudson in 2000, The Brain anchored a show long angle of attempting to take a tour of the Power Plant… of course he had to find it first. My article on that moment can be found here on the site, the first piece I did for WCW Worldwide. 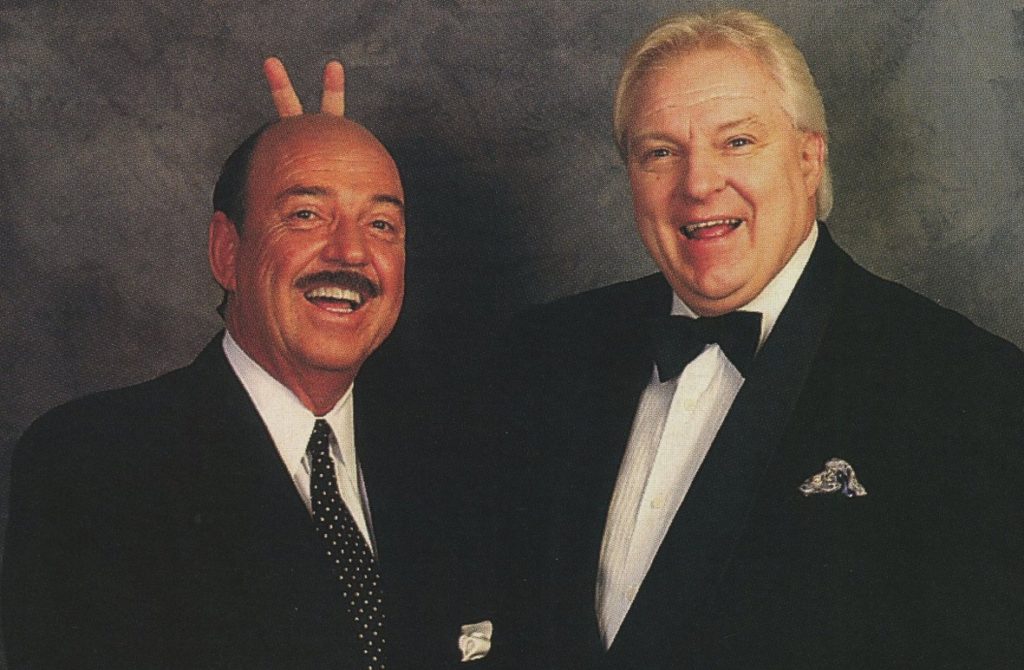 It’s hard for me to put into words what exactly I felt regarding the passing of Bobby Heenan. I wasn’t a person who grew up watching wrestling weekly on television, so I didn’t get a fandom crafted around vintage WWF Prime Time Wrestling episodes that featured Heenan so prominently. I never saw any matches with him whenever he feuded with the Ultimate Warrior or Hulk Hogan until a full decade after the fact. To me, Bobby Heenan was the voice of World Championship Wrestling during its prime, paired along with Tony Schiavone every week on TNT. Heenan was goofy and quick witted. He had great one-liners. He could also be audibly annoyed at times with whatever was going on in front of him or even at Tony Schiavone himself. Back during the heyday of WCW Monday Nitro, I don’t think I ever believed that Heenan or Schiavone really got along with each other. To me, there was always a strange awkwardness between the two that occasionally borderlined contempt for one another. I’d get the “real story” later on regarding how chaotic WCW was, as a whole, even including the commentary team.

There’s no better way at highlighting how strange Schiavone and Heenan’s chemistry could get than this match from an early ’97 episode of WCW Worldwide. Both are phoning in their commentary but five minutes into Mysterio vs Psicosis, a joking session about Hogan turns into something much more. As Heenan and Schiavone mockingly laugh at the terrible jokes they’re trading, they both outright admit their disdain for one another. Real or not, this one match has always been stuck in my mind regarding how I believed the two really got along behind the scenes.

Schiavone was the stiff, and Heenan was the star. You could never convince me to believe anything otherwise about this era.

After WCW folded and Bobby Heenan was diagnosed with throat cancer, I was saddened to see how a man so well known for his wit and his comedic timing was silenced from the disease. A WWE documentary on the life of Bobby Heenan was released in 2010 was filled with different wrestling personalities sharing their stories about “The Brain”, but one man was noticeably absent from all the clips compiled — Bobby Heenan.

Heenan had undergone jaw reconstructive surgery a few years beforehand and had a dramatic change in his appearance. After that, Bobby Heenan was never brought back to WWE television or even shown on his own WWE documentary due to the jarring changes he went through to prolong his life. The entire WWE special even felt like the people involved were discussing Heenan in the past tense, which made the entire thing so frustrating to watch since he was still going strong.

Bobby Heenan was still active and still loved wrestling after his diagnosis. He was regularly featured all across the county at various wrestling conventions and autograph signings. He was still beloved by so many, even if the reality of Heenan’s physical condition was heartbreaking to come across.

Bobby Heenan had his vocal chords and parts of his tongue/jaw removed and still continued on. He was a fighter and didn’t let cancer keep him from living out his life while he could. I’m glad that after everything he survived and endured, Bobby Heenan can now finally rest free of pain and discomfort.

Thank you for all of the memories, Brain.

The greatest personality to ever grace the wrestling industry.