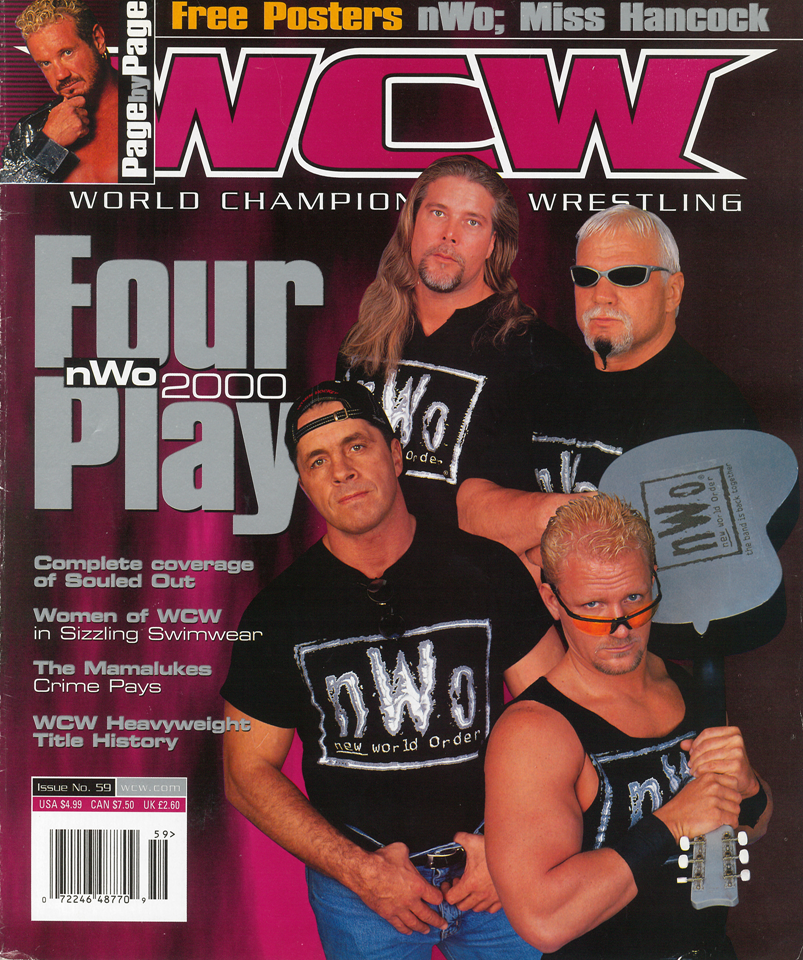 By the time this magazine was in store shelves,  both Bret Hart and Jeff Jarrett were taken out due to injuries. Jarrett was concussed due to a flying swan-dive headbutt Chris Benoit delivered from the top of a steel cage and Hart was just realizing how damaged he was from his infamous match against Goldberg at Starrcade 1999. On top of all this, Goldberg himself was also taken off television due to SLICING HIS ENTIRE ARM UP in a botched stunt involving the windows of a limousine getting punched out. In an attempt to salvage the group, WCW added The Harris Twins to the nWo’s roster but the entire concept was busted by March. Kevin Nash admitted years later that the group was purely intended to be nothing more than Goldberg chum and without him, the whole thing was dead in the water.

None of this mattered anyways as Eric Bischoff and Vince Russo would reboot the entirety of WCW television in early April, and the nWo 2000 group just faded away into obscurity. Still though, we got ONE pretty kickass poster before it all went to hell.

Some fun things in this issue — great, clean pics of Jeff Jarrett in front of his pyro, full advert for the WCW Tuff Talkin’ toys that recognized each other, and a pretty brazen full-page shot of Madusa getting BBQ sauce poured on her.

Full magazine is below, I’ve now got a hankering for re-watching WCW Souled Out 2000 due to the coverage included. I remember being absolutely terrified that Kevin Nash was straight up murdering Terry Funk for my $29.99 and becoming unglued at the end when Chris Benoit ended up becoming the WCW World Heavyweight Champion. Believe it or not, I was STILL watching and ordering the PPVs live but might’ve fallen out of this as the year went by. If you know how the year 2000 was for WCW, you wouldn’t blame me.

I was still watching WCW in 2000 too. The last ppv I ordered was The Great American Bash 2000 that had the human torch match between Sting and Vampiro. Looking back it wasn’t the best decision lol.

I think I went past that and got New Blood Rising and Bash at the Beach. I don’t know if I ever bought any more of them though…

I have from souled out up to slamboree on vhs. Not watched them for a little while but I think they’re great. I think getting bored due to over saturation of wcw circa ’96-’98 through best of, compilation and documentary releases is partly the reason, but I much prefer 2000 era wcw. Some of it is still absolute shit, but the majority of it is still watchable and entertaining. It’s certainly not as boring as the majority of current day wrestling. Of course, it’s all subjective. I’m also fond of what wcw was putting out in ’91, though not everyone… Read more »

My favourite incarnation of the group!

Thank you again for digitizing the magazines. There are very few things WCW that I haven’t gone back to revisit or experience for the first time. I (re)watched all the Nitros, Thunders, Saturday Nights, and Worldwides from the years I watched WCW originally, 1996-2001. I’ve jammed out to the theme songs once again, played the video games again, done it all… but I never had the chance to read the magazines until you started scanning them.

ABOUT US
A fansite that celebrates all things World Championship Wrestling. Website maintained by Bryan Barrera in Austin, TX.
Contact us: fanmail@wcwworldwide.com
FOLLOW US
wpDiscuz
7
0
Would love your thoughts, please comment.x
()
x
| Reply