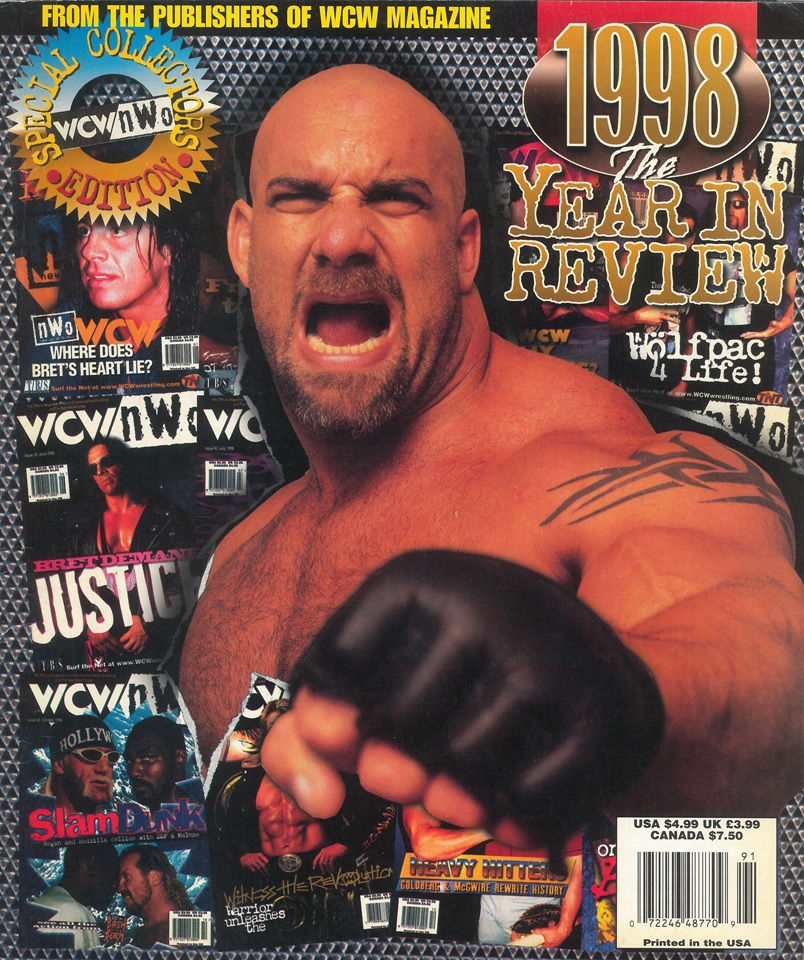 Apologies on this one not being as clean as some of my other magazine scans. This issue was a larger, squattier magazine compared to the others from this era, and the print for this issue was slightly off as well. Some of the page’s internal boxes and borders didn’t line up straight on my copy which made editing this an absolutely nightmare for my eyes.

Anyways, 1998 is over and things are looking good for World Championship Wrestling! We’ve seen the rise of the unstoppable Goldberg and the eventual end of his undefeated streak at WCW Starrcade. The New World Order splintered off to two groups, nWo Hollywood and the nWo Wolfpac. Sting painted his face red and after a year of being the silent vigilante, he refused to shut the hell up. Scott Steiner became Big Poppa Pump. Chavo Guerrero lost his mind. Billy Kidman became his own man away from Raven’s influence. The Latino World Order formed. The Ultimate Warrior returned and revealed himself to be the Ultimate Thesaurus in his rambling promos. Diamond Dallas Page proved that he belonged in the main event scene. Dennis Rodman, Karl Malone and Jay Leno all competed in a WCW ring!

There was a lot to that happened in World Championship Wrestling in 1998, and wrestling in general. Both the WWF and WCW saw record breaking ratings as the Monday Night War heated up and wrestling broke into the mainstream consciousness. Monday Night RAW would overtake Nitro in weekly viewers for the first time in close to two years, but the battle waged on as the two traded ratings victories back and forth throughout the year.

Everything is looking great! Can’t wait until January 1999 with good guy Kevin Nash as the WCW World Heavyweight Champion!

Welp. WCW was fun while it lasted.

1998 was the definitive year of my WCW (and wrestling) fandom.

WCW had so much promise and fell flat on its arse

Steven Spenadel I loved the Monday night wars, kids these days don’t understand how good it was back then compared to now

Gav Nutton your right, we had so much choice but I always followed Hogan, longing for his red/yellow return lol. WCW shoukd of won that war, but it had the same idea for like 4 years, nWo run in and interfere zzzzzz

Yeah, yet it was also him that made it a contender. WCW just didn’t know when nWo was getting boring. Unlike Vince he knew DX had ran its course

Hi do you have the WCW Magazine issue from March 1997 by any chance? I’ve heard that it had a Debra McMichael (big fan) pictorial in it and I’m just curious about the validity of that. Thank you

ABOUT US
A fansite that celebrates all things World Championship Wrestling. Website maintained by Bryan Barrera in Austin, TX.
Contact us: fanmail@wcwworldwide.com
FOLLOW US
wpDiscuz
9
0
Would love your thoughts, please comment.x
()
x
| Reply