Home WCW in WWE Magazine Quickie: “Vader, Bloody Vader!!” – WWF RAW
Given the amount of love this site has been giving to Vader lately, seems appropriate to get this feature on him from an old WWF RAW Magazine onto the site. The article, written by none other than Vince Russo (bro), focuses primarily on The Mastodon’s quest to be THE ONE in the World Wrestling Federation. After seeing success across the world in other promotions, Big Van Vader struggled a bit to showcase the monster in a WWF ring that he’d become well-known for. What was wrong with him? Was his time completely over??

Have fun reading the fully-kayfabed article on “The Man Called Vader”, full scans at the end:

“‘The One: The Match That Will Change Vader’s Life Forever’ by Vince Russo

To those destined for immortality there usually comes a moment in their careers when that one match transforms them from ‘great athletes with promise’ into ‘genuine superstars’. It happened to Bret Hart the night he upset Ric Flair in Saskatchewan, Canada, to become the World Wrestling Federation Champion for the first time. Shawn Michaels experienced the same when he climbed to the heights of Madison Square Garden via ladder at WrestleMania X. Then there was the evening that the Undertaker defeated Hulk Hogan… at a time when in reality no one could. And, as for Stone Cold Steve Austin? His transition came the first night he dodged the editing machine by speaking his mind live on an episode of Monday Night RAW.

When the ‘Man They Call Vader’ set hoof into the World Wrestling Federation, many said that by the time his reign of terror was completed, he would truly go down as a legend in his own time. Having conquered World Championship Wrestling and IWGP in Japan, Vader was already labeled a ‘genuine superstar’, but if he could get over that last hurdle and prove himself in the big league — the World Wrestling Federation — then he would demand the label of ‘icon’. And you could bet… nobody would deny him. It was inevitable. It was only a matter of time.

Vader debuted in impressive fashion at the 1996 Royal Rumble. Unfamiliar with the competition, he dominated the melee until he was eliminated by Shawn Michaels, as he and the 500-plus-pound Yokozuna battled it out too close to the ropes. Furious over his failure to win, Vader took it out on then interim-Federation President Gorilla Monsoon the following night, by nailing the Hall of Famer with a crippling Vader Splash.

Vader had arrived. Now… it was only a matter of time.” 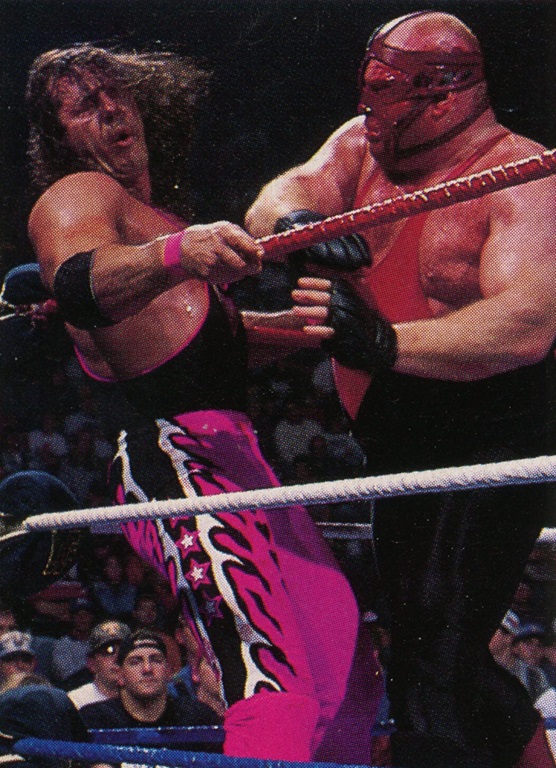 “Throughout the rest of the winter and into the spring, Vader’s tirade of terror on the World Wrestling Federation continued. His most noteworthy victories came over the mighty Yokozuna. A vicious feud that  Vader put to rest by cracking the Sumo’s leg, again courtesy of his devastating splash. The Mastodon was on a roll, but that one victory that would enroll him into the class of ‘legend’ seemed to elude him.

But, we all knew… it was only a matter of time.

The spring turned into summer, and with it would come that one match… or so we thought. Scheduled to meet Shawn Michaels at Summerslam for the World Wrestling Federation Title, many critics, including yours truly, pinpointed this night as THE ONE. The match in which Vader would declare… his own immortality. And, it may have happened too, had it not been for James E. Cornette. On that hot August night in Cleveland, Vader had the Champion beaten on two occasions, but Cornette, his obnoxious mouthpiece, insisted the match go on until it was decided by a pin. Oh, in the end, it was decided by a pin alright. Unfortunately, it was the weary shoulders of Vader that were found glued to the canvas. Instead of being THE ONE, this loss instead devastated Vader. For the next five months, the Rocky Mountain Bulldozer just wasn’t the same. Depression set in and weight gain soon followed. It got to the point when the thoroughbred could barely pull an apple cart.

With the success that he had once known, retirement had to be on the mind of Vader. He had to be asking himself the questions that one often asks in the twilight of one’s career. Have I reached my peak? Are my better days behind me? Is my time up? After doing some extensive soul searching, Vader soon came up with the answers to his questions… a resounding NO! Analyzing his situation, Vader came to the realization that his failures weren’t attributable to himself at all. No, what he was suffering from was mismanagement. Looking at James E. Cornette, Vader reached the conclusion that, rather than educating him and preparing him for competition in the World Wrestling Federation, Cornette was more concerned with ‘when pay day was’! In Vader’s own words, the misguiding manager was simply a ‘leech who was just sucking the blood out of him’.

In an effort to get back on track, Vader looked extensively for the brain who could support his brawn. In his mind he knew that only one man was capable… Paul Bearer. Vader had seen first hand what Bearer had done for the careers of the Undertaker and Mankind, and he soon concluded that if his time was going to come, it would have to be the ghoulish Gatekeeper who was winding his clock. After a handshake sealed the deal, Vader had not only new management… but a new attitude.

In the weeks that followed, Vader kept his relationship with Bearer a secret… until it could be revealed at the ‘appropriate time’. Under the guidance of the Gatekeeper, Vader ferociously hit the gym, dropping ‘a small child’ (50 pounds) prior to his Royal Rumble engagement with the Undertaker. As the world would soon find out, Vader was back in business, and again… it was only a matter of time.

The Mastodon shocked the world when he unveiled Bearer at the Rumble, and then proceeded to upset the Undertaker. Even though the new-fangled Vader won the contest, it just didn’t seem to be THE ONE. Because of Bearer’s interference, the victory was somewhat tainted. However — tainted or not — the fire was clearly back in Vader’s eyes. And, it burned with yet an even stronger intensity as Vader managed to survive to the final four of the Royal Rumble. Yes, it could have been THE ONE… had it not been for the chicanery of Stone Cold Steve Austin, who illegitimately disposed of him — and everybody else — over the top rope.

February 16th, 1997. This had to be THE ONE. The stage was set for the Mastodon to shine. He had Austin, the Undertaker and Bret Hart in the ring… all at the same time. Yes, this was going to be World War III and Vader’s guns were fully loaded.”

“Words can’t describe Vader’s performance that night… but the pictures on these pages surely can. Vader punished his adversaries, but in return… he paid a severe price. Early into the match, a chair meant for the Undertaker was kicked back into his own face, opening up a huge gash on the side of his left eye. A crimson river flowed from the opening, blinding the gladiator as he struggled just to keep his bearings. A lesser man would have thrown in the towel, but not Vader. No, this was going to be THE ONE… and, he was going to make sure of it. Masked in red, Vader battled for his life, as his eye began to swell shut. Like a pack of vultures smelling death, all three opponents berated the blood-soaked area with a barrage of punches and kicks… but Vader wouldn’t quit. He had to be going on instinct, because there just couldn’t be anything left. After Austin was eliminated, there were only three. THE ONE was only two men away. It was within his grasp. Vader could taste it.

After miraculously surviving a ‘Hit Man’ sharpshooter, Vader’s adrenaline began to pump at a feverish pitch. Sensing his immortality, he took it to the Undertaker, dropping the Dead Man to the canvas. After pulling Taker’s beaten carcass to the corner, there was only one thing left to do… you guessed it, VADER BOMB! But, as the Mastodon perched himself on the second rope, the Undertaker caught him with an act of desperation to the groin, dropping him over the top rope to the arena floor. It was over for Vader. He had lost. But, in defeat… this was clearly THE ONE. 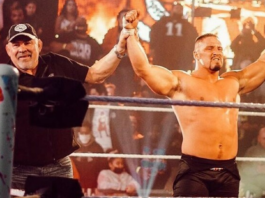 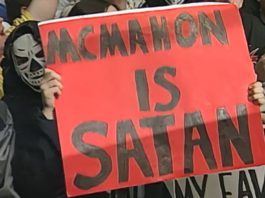 This Day in WCW History: The Final Episode of ‘WCW Monday...