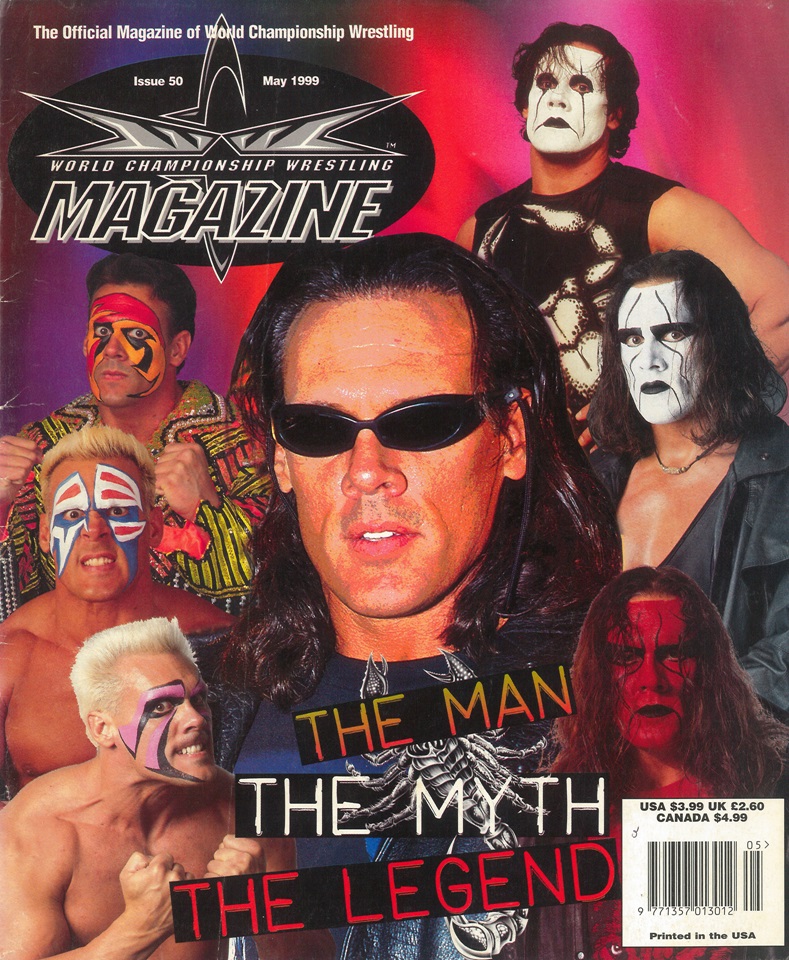 The Man, The Myth, The Legend… The Sting-Man!

This magazine took me an ungodly amount of time, these 1999 ones from the summer are so odd shaped. It’s a stocky magazine that required me to use my workplace scanner to get this all in. Luckily, I removed all traces of the scans from the network, but attempting to scan these issues are still a gamble. Getting walked in on while I’m scanning in a Kidman poster is one thing, but getting potentially written up or fired for that same Kidman poster…

Thankfully, I work in a small building that’s part of a larger complex. We only have five people in our group occupying the work-space, so I can get by usually without hassle.

With this issue, WCW Magazine has gone through another design change. They have removed the giant WCW/nWo branding and replaced it with the new star-looking logo that the company used until their demise in 2001. Content wise, everything is pretty much the same with the addition of a bonus pull-out poster inside along with actual ads included in the issue.

Flipping through, there’s a really great history of Sting included that I remember loving to go over as a teen due to all of the pictures included. Now, I realize that the piece has a bit more to it all beyond the cool photos. This article was the introduction to the new Sting, a man who had left WCW to undergo a full life-changing sabbatical. The setup and introduction to a born-again Christian who now puts his family and personal life before the world of professional wrestling. Sadly, the focus isn’t all on this fact but Sting admits to being a little nervous about potentially being shunned in the locker room by his new outlook. No one is named directly over which one of Sting’s friends would have been put-off by his new demeanor, but I do recall Lex Luger in his book dismissing this strange, non-partying Stinger who showed back up in WCW.

Imagine being so wrapped up in your pills and party lifestyle that you get upset when your best friend gets clean and sober.

Even though I’ve been continuing to upload WCW Magazine issues here on the main page, I have also been putting out exclusive items over on the WCW Worldwide Patreon. At this point, I’m up to the first four issues of Marvel’s WCW comic and I even made a kids’ book titled Your Guide to Everything Wrestling available to download.

Full access can be granted at only a $1 but physical rewards get sent out at the $5 and $10 marks. Get at it, everyone gets charged on the first of every month!

I still have this one. A friend of mine (back when we were in elementary school) used to take the posters that were on the inside of the front and back covers and put them behind the clear plastic on his 3 ring binder. I started doing that too so most of my WCW mags don’t have covers.

I remember my dad bought this for me at my first ever televised wrestling event WCW Thunder at the Bryce Jordan Center April 1999. Talk about a step back in time.