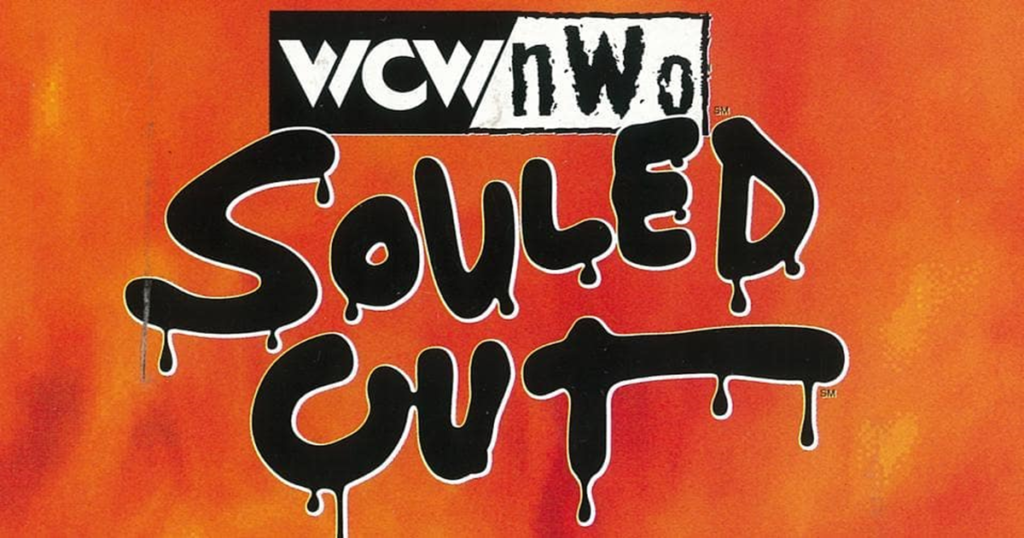 January 1999: Goldberg’s streak had ended, Ric Flair was WCW President, and the specter of the nWo loomed darker than ever as the Wolfpac and Hollywood branches realigned to form the nWo Elite. WCW approached the dawn of a new millennium, and Souled Out was to be the port from whence they set sail to reclaim dominance in the Monday Night Wars.

Goldberg was out for revenge against Scott Hall, who had helped to end his streak at Starrcade in a Stun Gun on a Pole match. You see, a stun gun is how Hall was able to down Goldberg and end the streak, so this match is what you might call “poetic justice.” Who says wrestling isn’t subtle intellectual high art?

Bill is off to a bad start as the show opens with him having been attacked in his dressing room.

The event begins with Mike Enos facing Chris Benoit. Benoit was my favorite as a child, but Enos, although never in the main event, was always one of my guys. The match mainly consists of Enos getting chopped into oblivion.

But Big Mike is no slouch.

All the goodwill earned with moves like this is quickly lost when a lariat doesn’t go as planned, and the crowd has no interest in letting it go unnoticed.

Benoit lives up to the old adage of “Crippler’s gonna crossface” as he picks up the win.

In weeks previous, a slightly-disturbed Chavo Guerrero, Jr. had been accompanied by a hobby horse named Pepe [not to be confused with Mongo’s dog or the now-problematic frog]. Norman Smiley sent Pepe out to pasture with the help of a wood-chipper and comes to the ring with the horse’s remains before his match with Chavo.

Chavo storms the ring, attacking Smiley with a vicious vengeance for his slain steed.

Norman turns the tide and is visibly pleased with his performance.

Smiley puts on a clinic of submission holds, slowing the pace. The dumb crowd stupidly starts a BO-RING chant like a bunch of idiots [I never claimed to be an objective journalist]. But if anyone knows how to get the crowd back, it’s Screamin’ Norman.

In full view of the referee, Smiley grabs the urn, giving Chavo a face full of sawdust before applying a submission for the win.

Because wrestling shows used to fill their time with wrestling, Fit Finlay faced Van Hammer. There isn’t much to tell, but it’s always fun when a little guy tombstone piledrives a big guy.

The production team takes a break to do the extremely-WCW thing of zooming in on a 90s babe in the crowd.

It’s a battle of big men as Bam Bam Bigelow meets Wrath. After his tag team with Mortis but before the formation of Kronik, Wrath didn’t have much direction, despite looking like a million bucks.

Similarly, WCW never knew what to do with Bigelow, despite his popularity and name recognition. The crowd is largely disinterested as the two brutes have an evenly-matched hoss fight.

The former Adam Bomb bounces his head off of the ringpost, enabling Bigelow to hit the Greetings From Asbury Park for the win.

Konnan seeks revenge against Lex Luger after the way K-Dawg was unceremoniously ejected from the Wolfpac. For those of you who may not have been fans at the time, it is important to understand just how insane the crowd was for Konnan.

Luger tries to reason with his opponent, explaining that sometimes teams have to make cuts, and Konnan simply didn’t deserve to be on the A-team.

The audience goes absolutely berserk as Konnan unloads on the Total Package.

Just as Konnan locks in the Tequila Sunrise, who should appear but Miss Elzabeth?!

But what business could she have with these two?

Liz’s interference enables Wolfpac Luger [the 2nd best version of Luger] to apply the Torture Rack for the win.

Up next Saturn and Jericho face off in a match with the ultimate stakes. These two masters of the mid-card meet in the squared circle in a battle that sees their honor, pride, and very manhood on the line. The loser of this match will truly lose it all as he will have to debase himself whilst doing the worst thing imaginable — wear a dress.

Jericho arrives at the height of his WCW tenure, complete with Ralphus.

Speaking of the head of Jericho Personal Security, he does an admirable job of modeling the garments at ringside.

Perry teases putting Jericho in his own finishing move. Ordinarily, this would be the most embarrassing thing imaginable, but not on this night when WEARING A DRESS is on the line. Luckily for Chris, instead he’s simply launched out of the ring and onto the floor.

Saturn looks strong throughout, even escaping a genuine Lion Tamer.

But unfortunately, no amount of skill can overcome a rigged system and a crooked ref.

Being a man of his word, Saturn endures the ultimate indignity and dons clothing intended for a woman.

Perry Saturn is the true face of bravery.

Up next the Cruiserweight title is on the line as the champion, Kidman, defends his belt against Juventud, Psychosis, and Rey Mysterio.

Rey is still somehow just as good today as he was 20 years ago.

This is a 4-corners match — one of the most confounding formats for a wrestling match. For those unaware, either legal man can tag either man on the outside, making him the legal man. This means there is no reason to ever tag yourself out of the match, because doing so would end your chance of winning said match. Tagging someone is dumb; not wanting to be tagged is dumb, but both happen throughout this match.

The 4 combatants seem legitimately confused about the format and treat the first half like a tag match.

Eventually, they figure it out and start breaking up pin attempts, albeit with little regard for who is legal.

There’s enough of a car crash on the outside, that Kidman is able to hit the Shooting Star Press for the win on Juvi (who was not the legal man).

In our semi-main event, the nWo’s Curt Hennig and his non-nWo-but-still-apparently-cool-with-them friend Barry Windham face off against Ric Flair in what was originally going to be a handicap match, but Ric is accompanied by his son and future United States Champion, David Flair.

Ric and Curt exchange verbal shots before the action.

David starts out the match against Windham, which seems ill-advised.

The younger Flair channels his old man and terrifies the veteran Windham to the very depths of his spirit.

Hennig does not suffer from that same fear.

Once again taking after his father, David takes a downstairs shortcut on Hennig.

Arn Anderson does Arn Anderson things, and Curt is nice enough to drag David on top of him for the win.

The newly-unified nWo swarm the ring, and Hulk Hogan shows how truly evil he is.

David is branded with the mark of Eric Bischoff who was recently deposed as WCW president by the senior Flair.

Speaking of President Flair, he’s handcuffed to the ropes and forced to watch as his son is whipped by Hollywood. This whole scene is actually really heavy and gross the more you think about it.

It’s time for the main event as Goldberg faces off against Scott Hall in a “Stun Gun on a Pole” match.

Referee Randy Anderson sends the stun gun (which is really more of a stun baton) on it’s journey up.

Hall wisely attacks the knee that was injured in the locker room attack from the top of the show.

A hobbled Goldberg grabs the ladder and quickly wishes he had not.

Hall ascends the ladder and, as is often the case in these matches, decides not to win the match while he had the chance.

Another attempt to climb the rungs is halted by Goldberg, who is now busted open.

The Wolfpac did not have a B-Team like the nWo Black and White did. However, if there was a Wolfpac B-Team, it would have consisted solely of Disco Inferno — who gives Goldberg a taste of his own medicine.

However, the match is not over until the weapon is actually used, and a kick from Goldberg delays that usage and sends the gun flying.

Bill retrieves the baton, stunning Disco. This does not win him the match, but it is an added bonus.

Much like some predators in the wild, Goldberg decides to play with his prey before the final kill.

Goldberg is victorious as the match ends with a shocking conclusion. No, not this one.

This one! When Bam Bam Bigelow reappears and attacks Goldberg, only to be stun gunned by an ungrateful Hall as the show fades to black.

Souled Out 1999 was twenty years ago, but in many respects it is a show that easily could be put on today, and I don’t just mean because we still have to periodically see Ric Flair and Hulk Hogan. Professional wrestling is unique in the fact that it’s ever-evolving, yet somehow never really changes. The very idea of 12 monthly pay-per-views was born out of this era when the Monday Night Wars raged. While Souled Out may not have had the grandeur to compete with the WWF’s Royal Rumble, their February offering for 1999 did have a main event with a little more on the line.