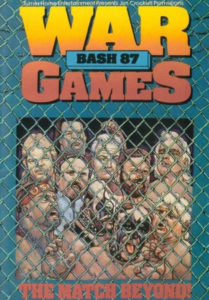 Created by Dusty Rhodes, who was inspired by Mad Max Beyond Thunderdome, WarGames quickly became a trademark of Jim Crockett Promotions and later WCW. The concept of WarGames was quite simple. Two rings, one cage consuming both outright. Two teams of usually four (sometimes five) men, one side would flip a coin leading to a team getting the elusive “man advantage.” Two men would start the match, and five minutes later the team who won the coin toss would have another person enter the cage. All remaining men would then enter the cage in two-minute intervals. Once all members of both team enter the cage, “The Match Beyond” would begin and the only way to win was for a member of either team to submit… or surrender.

Although it was originally created as a match for the Four Horsemen, WarGames has hosted many feuds and story lines over the years. The final proper WarGames took place at Fall Brawl 1998. And it sucked, as I’ve previously discussed.

Since the WWE’s purchase of WCW, fans and critics alike have clamored and craved for the return of WarGames. However over all these years, it just has never happened. Due to Vince McMahon’s insecurity of not wanting to admit anyone other than himself had a good idea, Dusty Rhodes greatest creation (including Dustin and Cody) has never had a chance to shine.

That all changes on November 18th. The WWE will finally resurrect our favorite little cage match. NXT Takeover: WarGames will air live on the WWE Network, the night before their annual Survivor Series event. WarGames taking place on an NXT show as opposed to a main roster WWE show is fine by me. Yes, Vince McMahon is in charge of NXT, but it’s the brand he puts the least amount of personal effort into. This means this is where something that isn’t his idea has the best chance to succeed. Just look at Shinsuke Nakamura for God’s sake. 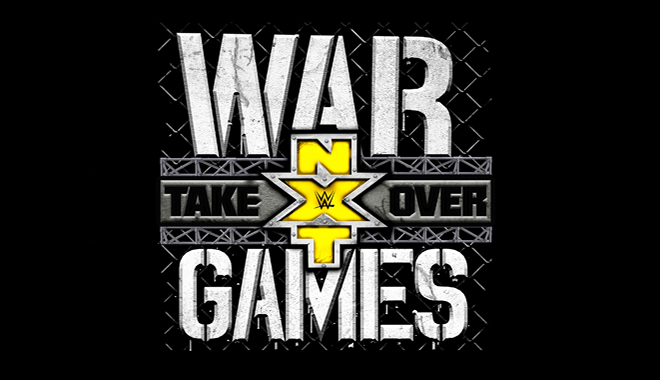 While I’m quite elated that WarGames is returning, it got me thinking; when else could it have came back? There have surely been dozens of opportunities to use “The Match Beyond” over the last fifteen years, but when was in most deserving?

When SHOULD the WWE have used WarGames? 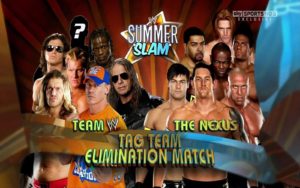 In the summer of 2010, a group of disgruntled rookies who competed on the first season of NXT (which was a competition show at first) made their way onto WWE’s main roster. On their first night, they attacked and brutalized John Cena, destroyed the ring and even beat down ring side announcers, camera men and time keepers. It was a fresh, exciting story line. The group began referring to themselves as the Nexus and coining the clever phrase, “You’re either Nexus… or you’re against us.” And trust me, it sounds much cooler coming from Wade Barrett, the leader of the group.

After running through much of the roster, the Nexus had made many enemies and needed to be dealt with. This led to Cena forming Team WWE to destroy the Nexus as WWE SummerSlam.

Now while this story definitely had the heat which could have deserved a WarGames, the numbers were slightly off. The Summerslam match was seven-vs-seven, much more than the usual four-vs-four or five-vs-five. Of course you could easily trim out four of the participants and the match would mostly be the same. This also would have been a clever way to prevent the asinine finish of the match, which saw John Cena single-handedly defeat three members of the Nexus after being DDT’d on freaking concrete. Bleh.

In a slightly more ambiguous pick, I think the spiritual successor of the Four Horsemen deserved to have their chance at war.

The faction consisting of Triple H, Batista, Randy Orton and Ric Flair were at the forefront of Monday Night Raw during the first few years of the WWE’s brand split. As their name suggests, the faction represented the evolution of talent in pro wrestling. The veteran Ric Flair, the current world champion Triple H, the future cocky heel Randy Orton and the future monster heel Batista. It was a perfect dynamic and the four men gelled perfectly together.

However, they were hated. Evolution were the epitome of the word heel. And because of this hatred, there was always a need and a desire to see them get their ass kicked. What better location for an Evolution ass kicking than WarGames!? Considering the Flair connection, it would have been so perfect.

Who would their opponents be? Pfft, does it matter? Just pick any four babyfaces from the Raw roster in the first six months of 2004 and you’re good! Like maybe Shawn Michaels, Chris Benoit, Mick Foley and The Rock. HOW AWESOME WOULD THAT HAVE BEEN!? 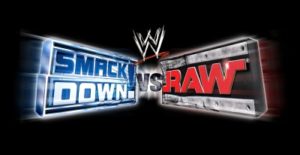 One of the residual effects of the death of WCW was WWE’s brand split. In 2002, the WWE roster was broken into two factions; one group designated to Monday Night Raw and ther other to SmackDown. This was an attempt to create competition in a now competition-free professional wrestling world, and it actually worked for a little while. SmackDown and Raw were very close in viewership numbers with SmackDown being more critically acclaimed for the first couple years of the split.

As a result, a kayfabe feud was created between the two brands. Brand loyalty for each wrestlers’ representative television show actually took precedent of heel/face alliances, which was pretty unique.

While the competition between the two brands was never anywhere close to the competition between WCW and the WWE, Raw and SmackDown were more than deserving of a WarGames match. How cool would it have been to names like Kane, The Undertaker, Rob Van Dam, Eddie Guerrero, JBL, and Rey Mysterio in freaking WarGames!? But alas, it was not to be. Thanks, Vince! 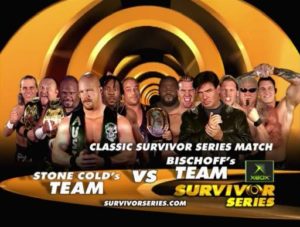 WrestleMania XIX; One More Round for Stone Cold.

After mounting injuries and quite frankly having nothing left to do, Stone Cold Steve Austin retired from in-ring action after his ‘Mania classic with The Rock. While Austin certainly deserved some peace and quiet, there was still a metric shit-ton of money to be made off of the Texas Rattlesnake.

This gave us the wonderful run of Stone Cold as the co-General Manager of Raw. His partner? Eric Bischoff. Yes, the same man who fired him from WCW in 1995.

The first few months of their partnership was mostly played for laughs, but by the end of the year, things were getting pretty damn heated. Literally, as Eric Bischoff blamed Steve Austin for Kane setting Jim Ross ON FIRE (!!), which led to brief suspension of Austin. 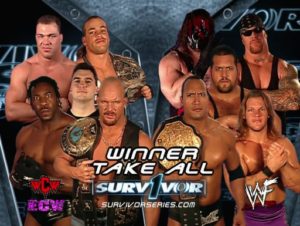 The Invasion storyline following the WWE’s purchase of WCW sucked. You already know that. If anyone is wondering, I will never write in depth about the Invasion; I value my sanity too goddamn much. But hey, the match at Survivor Series 2001 was awesome!

Yet, the final match of the Invasion may be the only redeeming factor of the entire six month disaster.

The Alliance was comprised of members of both the WCW roster and the ECW roster. Now ignoring the fact that it’s laughable to compare ECW to WCW, The Alliance had a pretty talented roster. And the WWF roster in 2001 was phenomenal, probably only second in terms of depth to 1997 WCW.

As watered down as it was, this was the closest we’d ever get to seeing the WWF vs WCW in a proper fashion. The Alliance team was Booker T, Rob Van Dam, Kurt Angle, Steve Austin and Shane McMahon. Team WWF was Chris Jericho, Big Show, The Undertaker, Kane and The Rock. Can you think of 10 more talented men in pro wrestling in 2001? (Not counting Shane, I know, shut up)

Not to mention the stipulation was that whoever lost the match would be out of business. How apropos would it have been for WCW’s last hurrah to take place in one of the most famous trademarks. Perhaps history would be a little kinder to the Invasion if its conclusion took place in WarGames.

After all, War is hell. And the Invasion was hell. 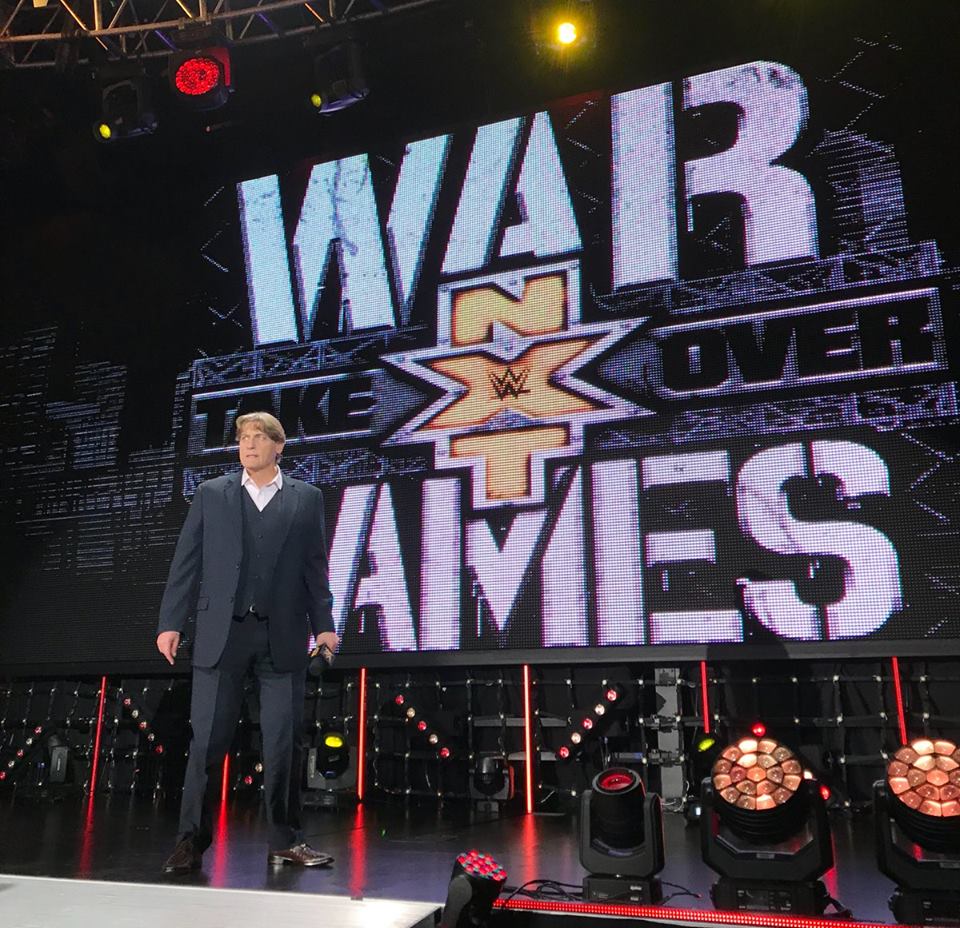 Overall, I’m optimistic for NXT TakeOver: WarGames. I think that unlike the reboot of Starrcade, WarGames is going to get the proper love, care and affection that it deserves. And if it sucks? Who cares!!? We still have Sting’s Squadron vs The Dangerous Alliance to pull up on the WWE Network anytime we want. And that’s all that truly matters.

Honestly, I think the REAL reason they haven’t brought back War Games for WWE is simple logistics–having the two rings present cuts the number of premium seats you can sell by 50%.

I think it’s more that Trips is an NWA mark and has wanted to see a two-ring War Games for a loooooong time in his little indy promotion.

I remember being SHOCKED that the Shield/Wyatt Family match at Elimination Chamber 2014 wasn’t in the Chamber in a War Games-like staggered entry, one-fall match; the four pods would have worked perfectly for a six-man tag.

Apologies, I read that as have instead of haven’t.

Wouldn’t having two rings actually increase the number of premium seating? Instead of three sides of the ring having five rows of $300 seats, you now have five sides.

Not necessarily, though I see your point. If a smaller entrance stage were used or if it were in a bigger stadium, there would still be plenty of premium real estate. Not to mention if it were a brand split era Raw show, they wouldn’t even need room for the announce table at ringside, which is what I expect for the NXT show.

oh nice idea for an article!

Thank you! I’ve never seen anyone really talk about this before and there are tons of feuds that also would have worked in War Games I didn’t even mention.

I want a Triple Cage match

Patience! I honestly expect this to be used one day, maybe not even in WWE.

ABOUT US
A fansite that celebrates all things World Championship Wrestling. Website maintained by Bryan Barrera in Austin, TX.
Contact us: fanmail@wcwworldwide.com
FOLLOW US
wpDiscuz
9
0
Would love your thoughts, please comment.x
()
x
| Reply